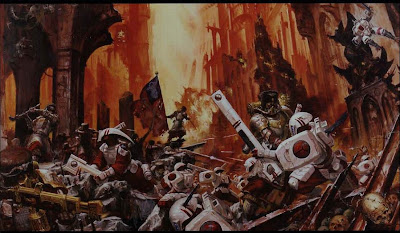 There is a lot regarding what is coming in the near future in this rumor set. Its hard to figure out with so many things on the near horizon, exactly the order of things, but this at least gives us an idea on what we might be seeing through the end of this year, and into the next.

via Stickmonkey over on Warseer
In August I said early next year, in the first post I said my sources are still saying early next year, but that my personal view is they it's probably q2/3. Listen, I don't know with any iron clad certainty when anything will hit, but I do look at the 2 months left in this year and then 6 months for the first half of next and add 1 and 1 to get 2.

If Hastings is right, and Harry is accurate, which those guys normally are, then we have 3 wfb army releases, a LOTR release or two, a wfb wave release, and 2 40k codexes that are all pretty much what I've heard...ALL before Tau or Eldar. That's 8 months and eight things pretty solidly rumored ahead of tau. My sources tell me early next year, I assume that's the first half of the year. But logic tells me not with the stack of items ahead of tau. So that's why I say q2/3. I figure the lot of you are reasonably smart and can deduce the same from all the other rumors out there, so I didn't feel a need to explain it in detail.

But I will put my stick in the sand.

Nov - rumored WoC model wave (Harry, somewhat confirmed by Hastings)
Nov/Dec - DA. ( me, Hastings, others, pretty much looks like it will be a rare codex release in Dec to me despite historical precedent, however if WoC is only a wave release maybe, just maybe they will be in Nov.)
Dec - Hobbit (LOTR, pretty much a shoe in based on the shareholders meeting)
Dec - bloodbowl ( I don't have anything on this, but there has been a lot of speculation and hinting of something else special and signs point to a BB set. My take - I think this will be GDUK2013 surprise release and we won't see it this year)
Jan - Daemons ( me, Harry somewhat, Hastings, all have Jan as a double dipping of wfb and 40k daemons following up on the August wd update)
Feb - WoC wfb (I think Harry, others, full army book for WoC)
Mar - LOTR ( I don't follow the LOTR dev much, but things I have heard lead me to believe there is a big release slotted either here or April)
April - 40k supplemental wave ( this is where the chatter I hear has a bunch of wave releases for 40k, could be the delayed 2nd wave of flyers, or possibly the ork wave I've heard of...)
May - wfb High Elves (Harry I think, others)

June - assuming I'm close with my above. Then the first slot Tau could occupy is June. I have nothing penciled in here.
July - 40k expansion book (allies? Terrain?) and supporting models (me. This should firm up in the spring for sure, but my info all points to a book expansion for 40k in July)
August on - your guess is as good as mine, but I expect a big box release with GDUK which I have pencilled in as Blood bowl as mentioned above. August is likely a fantasy release based on my info, could be Dwarves or more Men. And then my info points to another marine dex before year end and eldar...but logic seems to dictate two codexes between September and year end is unlikely...but so it w this year and most rumormongers are expecting a second codex before year end. So there you have it. That's pretty much the logic I have behind the release schedule. Feel free to pick it apart, it just my best guesses based on how and who I have heard things from.

Hastings has repeatedly said that the tau are the first exclusively 40k codex next year, and that they are early next year.
I am not one to go against Hastings, it's entirely plausible the April slot is tau and I have information wrong. However, my sources are pointing to this 40k supplement book expanding on allies somehow, and how better to promote that than a closely released Tau book, who fluff wise rely on allies heavily? It makes marketing sense, but I guess the argument is when has gw made sense?

Also, with regard to faeit's rumors update.

I can definitely see the supposed cc option being a close range hail of fire unit when it comes to tau. But my sources call it a cc variant, so that's what im reporting.

I heard a long time ago about tau, nid, ork, and eldar terrain being worked on, I can certainly see these coming with codex releases as fortifications. Xenos terrain is sorely missing, but the question is can they sell it? I think if it's army themed and in the codex they can.