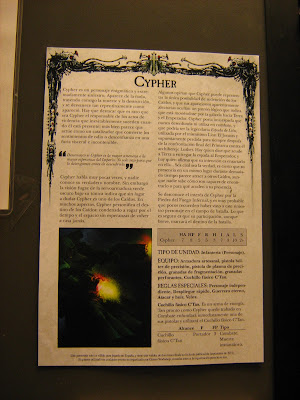 This page has the looks of a codex entry and yet apparently is not. It was released in Spain with two month expiration date....... I'm not really sure what that means, but hey, lets take a look at it.


The image comes to us via Luis Ed(Agramar) at El Descanso del Escriba
"I took the photo of the rules for Cypher this morning in GW Argüelles(Madrid)"
http://descansodelescriba.blogspot.com/2012/10/reglas-de-cyphercon-caducidad.html

Here is a partial translation via Son of Dorn over at Most Perturbatory
http://perturbatory.blogspot.com/2012/10/new-cypher-spotted.html


The first is the paragraph immediately preceding his stats:
"No one knows why Cypher is interested in the Stone of Infernal Fire, and it's very probable that few remember seeing this sinister figure on the battlefield. But what's certain is that participation, however brief, will mark the outcome of the battle."

The other is a translation of the text at the very bottom of the page:
"This character is only valid in Spain for 2 months after the publication date (September 2012). If you want to use him in a non-GW event, consult the TO for permission."

"My name is Luis, aka "Agramar". I took the photo of the rules for Cypher this morning in GW Argüelles (Madrid) you can find it in my own blog [linked in first paragraph]. The rules are official only in Spain.Yeah, I know it is quite strange but that is the way it is.

They are official only in Spain and it seems to be useful just for a couple of months."

"Yep, it is something taken from GW: the staff of the GW shop told me that they had adapted the rules to be used in a game -you know, the rules were given as they appear in the pic, and they modified them as they wanted to be used in a particular game played there.