Insights into The Genesys Project: Characteristics 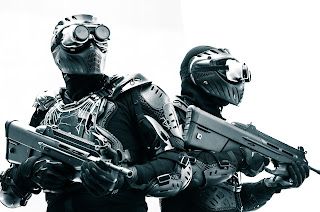 As in any game getting down to the basics helps new players grab a hold of the base concepts on how the game is organized and plays. In a game like the Genesys Project where you are creating your own faction a look at your factions characteristics and what they are is a first step to creating your faction/species.


There are essentially 9 characteristics that make up the models for your faction. They are divided into three groups and are used on the gaming table, with several that combine to create target numbers. This ensures that models that are quick and fast are harder to hit with Ranged Weapons, while those highly skilled in melee combat are more difficult to high with close combat weapons.

Characteristics range from 1-6......mostly but of course go above and beyond it. The Genesys Project is a D6 + Characteristic game.

Target Numbers....
Paying attention you have noticed that there are a lot of target numbers in the Genesys Project. In fact there are three.

The final release versions of the Genesys Project are underway, and we will talking more about this game very soon.

Need to know more... you can get a game overview here at this link
http://natfka.blogspot.com/2018/04/introduction-to-genesys-project-what-is.html