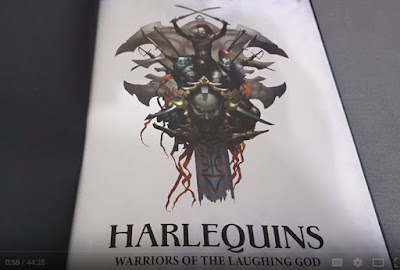 There are reviews going on now as the codex is in many peoples hands. Here are a couple of the reviews I have read.


Bob is sharing much more than this, but here is a quick look at the highlights.

via Bob over at War of Sigmar
https://war-of-sigmar.herokuapp.com/bloggings/2960

III) The rules
If you are an Harlequins player, sorry ! Everything is nearly identical of the index. On the other hand it make sense as profile were already good and nothing felt really wrong about their stat line. One thing was wrong in the index, their points cost !! the kiss was 14 points IIRC in the index ! crazy expensive, even with 4 attacks in melee.

Still there are a few changes :
Change
-All melee weapons lost the fixed strength and got a modifier.
ex : kiss went from : s4 ap-1 D3 to S+1, ap-1 D3
-Death Jester got a little buff in the form of a -2 LD debuff on Shrieker kill.
-Shadowseer know smite and 2 powers from the new pyschic list. (huge buff)
I think that is all, i may have missed a few things but profile are all identical.

Points Change
GW heard the Harlequins players, points are going down !
1) Kiss price is halved !
2) Death Jester -30pts !
3) Troupe -2 et another -1 as the basic sword is free. yea the basic Troupe member went from 16 to 13. And the kiss equipped one from 29 to 20 !!! that's a huge discount.
4) Solitaire -10
5) Skyweaver -5.
In a nutshell everything is becoming cheaper even the Shadowseer get a -9. Only 1 unit became more expensive, the troop master got +10.
When you think about it a full Troupe(12) with basic equipment is only 156 points !

Psychic phase
Just one word : "Solid"
Yea the list is super good, one Seer can take 2 powers, but it's still a difficult choice.
Seer become super support in this codex, they still have the -1 to wounds aura, and they can grant -1 to hit with 2 spells or a 6 FNP bubble. 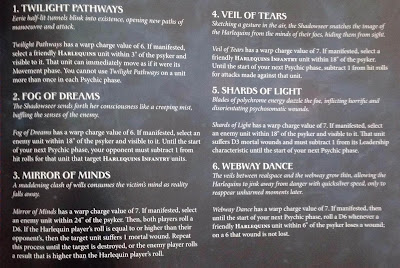 Stratagem
Loads of them as usual, increasing the durability of the army, giving dmg buff or movement trick.

ps : There is 2 Webway stratagem that both break the 9" rules ^^ 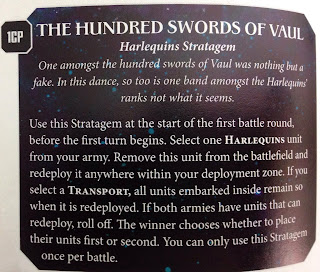 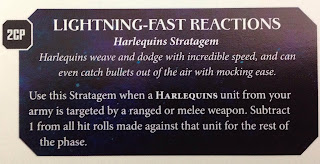