A good preview with lots of rules here for the Imperial Knights coming to pre-orders on Saturday.

There are lots of Warlord Traits to choose from... 6 for everyone and 9 for the Households. Also 22 Heirlooms and rules to make your Freeblades.... for really customizing your Knights.

via the Warhammer Community
https://www.warhammer-community.com/2018/05/31/imperial-knights-building-your-champion/


One of the best things about Warhammer 40,000 is customising your own champions – from legendary Company Commanders of your own invention to just a Freeblade you’re particularly fond of. The latest generation of codexes has made customising your heroes easier than ever – as well as being able to pick the wargear of your favourite heroes, there is a huge range of Warlord Traits and Relics of varying types to help make them truly distinct. 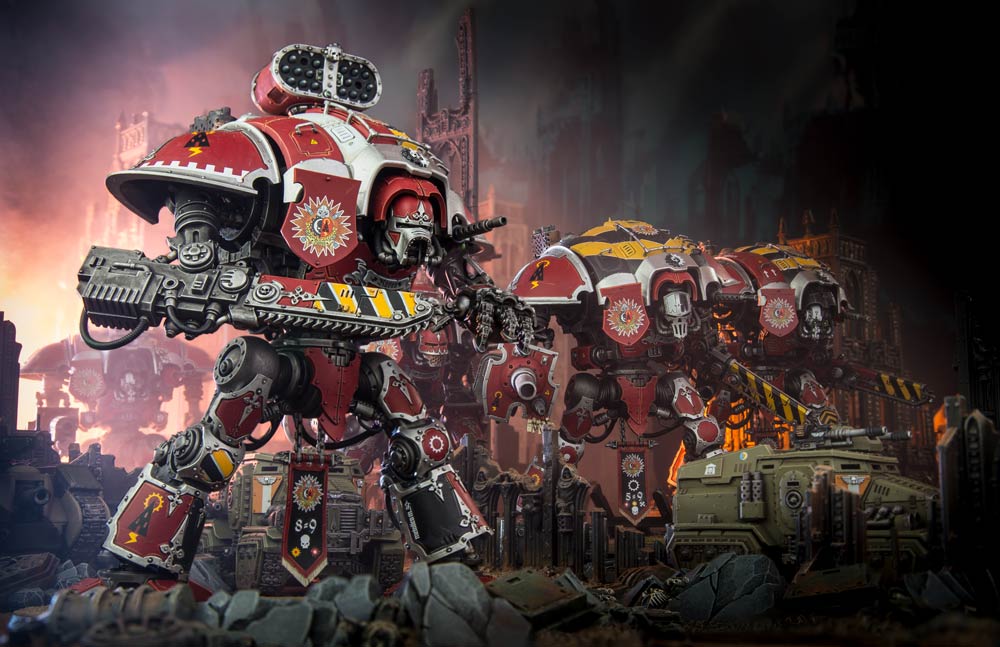 Codex: Imperial Knights is no different, allowing you, for the first time, to truly represent the distinct character of these legendary champions of the Imperium. With powerful Warlord Traits, a vast array of Heirlooms of the Noble Houses and a set of tables that allow you to generate flavourful Freeblades, you’ll be able to fully indulge your creative side and open up new tactical opportunities.

One model in each of your Imperial Knights Super-heavy Detachments can be a Character – and one of these Characters can be your Warlord and gain access to a range of new Warlord Traits. If you’re fielding an army of only Knights, this allows you to fully represent the unique skills of your Warlord. If you’re taking one of the larger Imperial Knights as part of a wider Imperium force, consider adding a couple of Armiger Warglaives or Helverins to fill out a full Super-heavy Detachment, so your larger Knight can gain Character keyword. 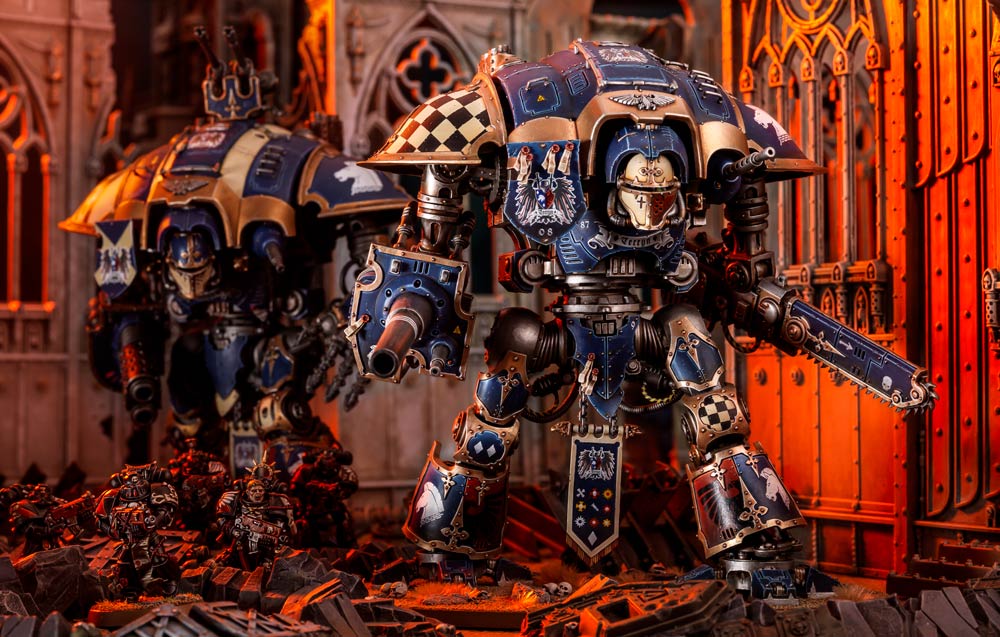 Your Warlord can be customised with no fewer than 15 unique Warlord Traits – that’s 6 for everyone and one for each of the nine specific Knight Households. Each of these traits is very powerful – Ion Bulwark, for example, is a great way to bolster the already prodigious durability of a Knight Valiant, while Landstrider is perfect for an army of assault Knights looking to quickly close the distance on the foe:

The Household Warlord Traits are equally powerful. Legacy of the Black Pall, from House Mortan, makes your chosen Imperial Knight incredibly difficult to hit at long range, while Vulker’s Adamantium Knight prevents anyone from wounding you on anything better than a 4+ – perfect if you’re going toe-to-toe with other Titanic units! 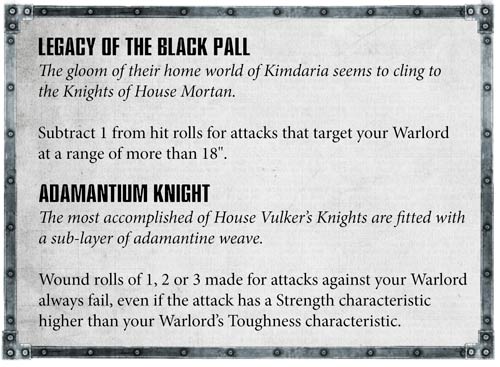 The relics of each Knightly House are among the most potent in Warhammer 40,000 – after all, upgrading a Company Commander is one thing, but when your army is being led by a colossal war machine it’s another entirely.
There’s a ton of special wargear – known as Heirlooms of the Noble Houses –  in Codex: Imperial Knights, designed to represent the unique equipment accumulated by these champions over a lifetime of war.
Maybe, for instance, the thunderstrike gauntlet isn’t quite powerful enough for your taste – well, how does one with a massive 8 Damage sound? 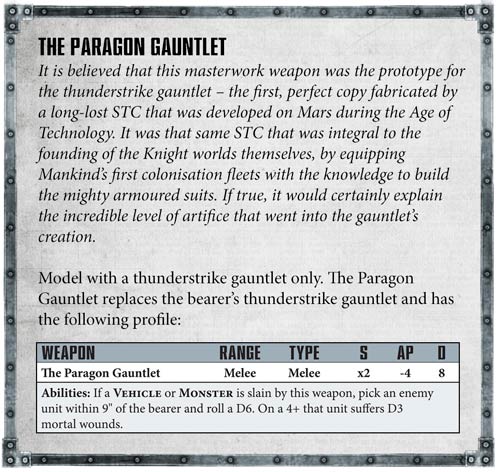 Perhaps you’ve got an army made up of only Imperial Knights and need a way to deal with those pesky Flyers? Skyshield’s extra AP, range and shots should help out: 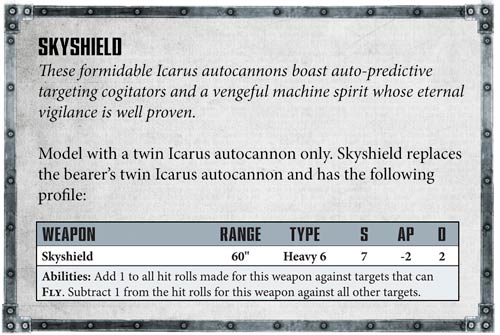 Maybe you’re looking to use your Imperial Knight as a bulwark for the rest of your army – in this case, the Banner of Macharius Triumphant will allow you to capture and hold objectives, even those contested by greater numbers of enemies. 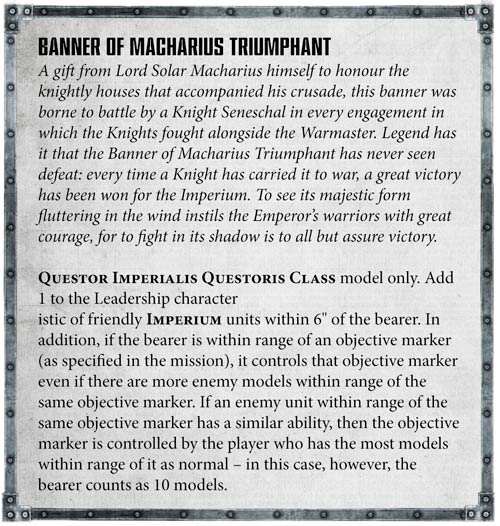 Last, but not least, we’d be remiss in not mentioning Endless Fury – an avenger gatling cannon that’ll scythe through hordes and heavy infantry alike with a terrifying hail of ammunition. 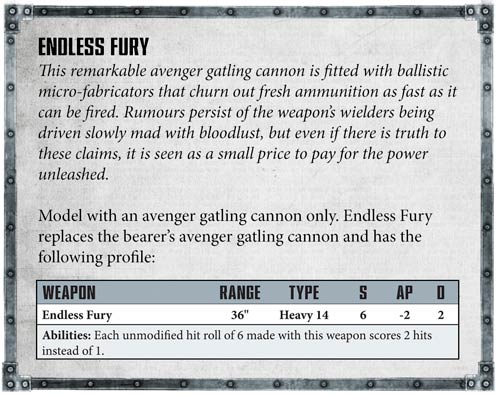 These are just 4 of 22 Heirlooms available in the book, with options to suit every kind of player and every kind of Knight – even if you’re not using an Imperial Knights Warlord, you’ll be able to grab one for a mere Command Point (or three!) with Heirlooms of the Household:

When you’re adding an Imperial Knight to your army, you’re free to take advantage of the new Knight Household Traditions – but we reckon you’ll find it equally rewarding (not to mention fun) to create a Freeblade. 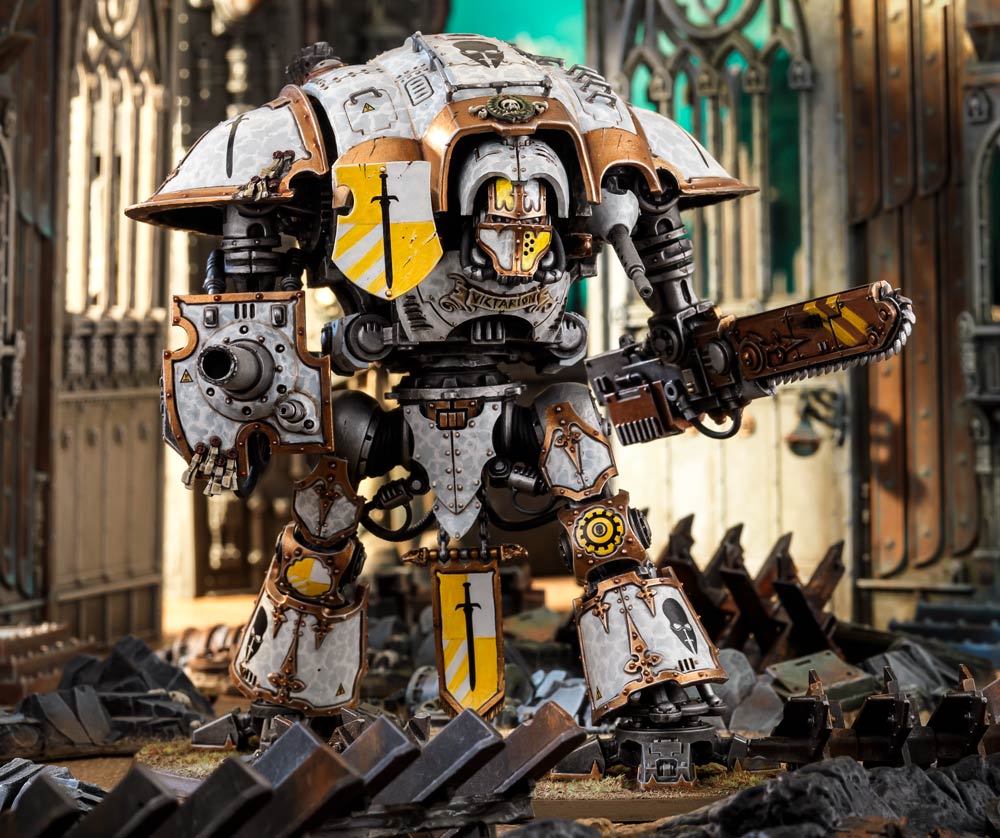 Freeblades are Imperial Knights without households – some left of their own volition, some have undertaken long, personal crusades and some are the sole survivors of once-great knightly houses.
Codex: Imperial Knights contains tables for generating one of these legendary heroes. For each, you’ll be able to pick one Quality – a powerful ability that represents their unique form of heroism – or you can roll on a table for two. But in return, you’ll have to pick two Burdens (or roll for one) to represent the eccentricities and flaws of each Freeblade. Burdens don’t apply all the time – you’ll test your Leadership at the start of each turn to see if they have an effect.
By using this system, you can quickly end up with some really interesting options. You could, for example, end up with a Freeblade of unparalleled skill with the Peerless Warrior and Indomitable Qualities… 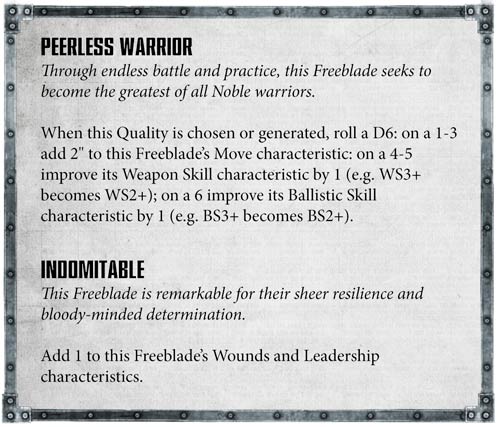 …who occasionally falls into a murderous, unstoppable rage and is forced to charge the nearest foe thanks to Driven to Slaughter and Impetuous Nature:

For MAXIMUM GALLANTRY,  throw caution to the wind and roll on both tables for the best results – while you’ll lose out on choice, the potential rewards are well worth it.
The best thing is that each Freeblade can be your Warlord AND can take Relics, making them the perfect choice if you’re looking to add a lone Knight to your army and offering you huge freedom when customising them. Freeblades are also great picks in a wider Imperial Knights force, helping you fill roles that the rest of your Household might not be suited to – for example, you could add a close-combat focused Freeblade to a shooting force from House Vulker. Freeblades won’t benefit from Household Traditions, but taking one won’t stop the rest of your army getting to use one, so they’re a natural pick in any force.