The next faction focus being released are the Legions of Nagash. Get your Endless Legions going, and create that unstoppable continuous wave of units on the tabletop.

via the Warhammer Community
https://www.warhammer-community.com/2018/05/24/24th-may-faction-focus-legions-of-nagashgw-homepage-post-3/


No faction benefits more from the changes to summoning than the Legions of Nagash. Indeed, the book was designed to function around the new summoning mechanic, and you’ll find the Endless Legions command ability – which allows you to choose one destroyed unit and set it up again – an essential part of your strategies. It gets better when you consider that you can use the same command ability multiple times in the same turn – you could well be bringing back two or even three units every turn! Powerful summonable units like Grave Guard, taken in large units, will be highly effective choices in the new edition.

Likewise, you can stack command abilities and spells to pull off some pretty evil combos worthy of the Great Necromancer himself. Let’s say we’ve got a block of 40 Skeleton Warriors with spears. Usually, you’d be getting 120 attacks off of these guys – pretty solid stuff! But it gets better…
Firstly, by using the Vampire Lord’s Blood Feast ability, we can give every model in the unit an extra attack, before giving them ANOTHER with the Wight King’s Lord of Bones command ability. That’s us up to 200 attacks – and we’re not done yet. 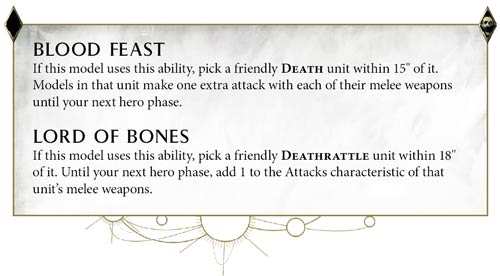 By using a general with the Lord of Nagashizzar command trait, we can give every model in the unit yet more attacks, bringing us up to 240. We’ll want to make sure these all hit, so for good measure, we’ll throw in the Vampire Lord on Zombie Dragon’s Dread Knight ability to give them re-rolls.

Finally, we’ll cast Vanhel’s Danse Macabre on the unit with a Necromancer to let them pile in and attack twice – for a total of 480 attacks that all re-roll misses. Hope you brought plenty of dice!

This combo isn’t just theory-crafting – it uses only three command points and decent Heroes that many Death armies will be using anyway. Should anyone kill your Skeleton Warriors before they get to attack, well, just bring them back!
Meanwhile, Nagash’s magics are well represented with the Endless Spells, and in the new edition, all Wizards will be able to harness the sinister powers of Death. We personally have a fondness for the Suffocating Gravetide – a brutal, roiling mass of spirits that drags enemy soldiers down into the earth: 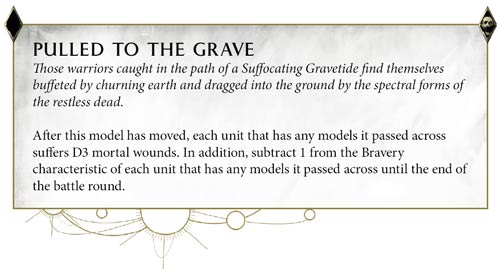 As if there wasn’t enough good news for the Legions of Nagash – we’ve got some exciting announcements about the new Nighthaunt units. While the Nighthaunt will be getting fully realised as a faction in their own right, many of their units will also be accessible for Legions of Nagash armies – so if you’ve been eyeing up the new models, now you’ve got an excuse to pick them up…