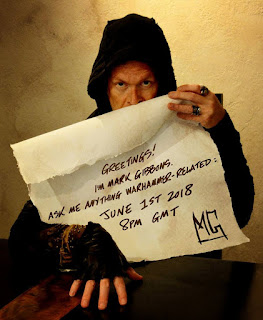 Another Ask Me Anything.... for Mark Gibbons. Head on over there and get some questions ready and we will check back on Friday to see how its going.

via Reddit
Mark is a legendary GW artist who worked for GW during the last golden age. Since then he's worked for gaming giants like Epic Games and Blizzard.

What?
An AMA! Ask me anything. Not me though. You'll be able to put any question to Mark.

Why?
We're building something new, and cool and involving at /r/warhammer. We want to involve all levels of the community, and that includes you!


Mephiston
Dark Angels Chaplain
He also worked on WFB, doing some defining artwork for the setting.

What do you want from me?
Firstly, start thinking of questions. Don't worry about posting them here, as the AMA itself will have a new post. We will be accepting any and all questions, they don't have to just be about his work on GW games.

Secondly, we'd love some suggestions of people in the hobby that you'd like to see do an AMA.

Some more more info on Mark
Dropping out of art college after two weeks of painting with custard and gravy to play bass in a 1980s Hair Metal band might not have been Mark's wisest of moves considering his subsequent choice of careers.

Born and raised in Wales' capital city of Cardiff, Mark's earliest professional commissions were in local television and advertising before Games Workshop lured him north to Nottingham in 1992 to begin what he affectionately refers to as his "spiky period". Over the subsequent five years Mark created hundreds of pieces of art for the iconic Warhammer game universe.

In 1996 the dawn of the PlayStation age drew Mark away from the tabletop and into the digital realm where he spent most of the next twenty years working for a variety of video game development studios, including Sony Computer Entertainment and more recently, Blizzard Entertainment where he spent seven years, the last four as World of Warcraft's concept artist.

After a stint on the Foundations team at Riot Games, helping to flesh out the world beyond League of Legends, Mark has returned to the turbulent waters of the freelance. He continues to work in the games industry, splitting his time between art directing, illustrating and developing his own line of tabletop board games.
5/30/2018
Natfka
Ask Me Anything, Games Workshop