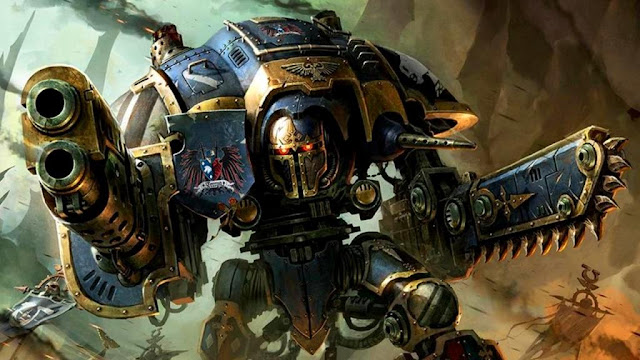 There are quite a few rumors out there, but the one that sticks out is that Imperial Knights have been confirmed to be the next codex, but with such a packed June (new edition Age of Sigmar), it looks to be difficult to find an open slot for release. A 2 Week pre-order has been suggested, but as of now we are still in the dark.


Here is a compilation of rumors compiled by

19 May
Martin and Robin Cruddace live on Warhammer TV just confirmed the Imperial Knights is the next Codex and due very, very soon!

The new Imperial Knight codex will contain TEN Knight datasheets, and would like to add the name Preceptor to the list of models that we will be seeing soon. He also confirmed that the four names quoted above in bold are correct with each being a variant of the other.

the Knight codex will also have a terrain datasheet just like the Harlequins, and a special character datasheet too.

Update: Sources tell us to expect Knights by the second week of June 2018

via Scanner(facebook)
Dual Dominus Class model kit is bigger than existing Knight. Both have one shot 2d3 autocannon missles D3 damage that ignore inv saves and can target any character with a strategem. Reload by docking with new terrain piece. Valiant harpoon: S16 -6 10 damage rerolls hits against big targets & d3 MW additional. Another strat makes the knight a Voidshield generator for Imperium keyword.

Terrain is like tech priest with the ability to re-load, heal, and max out weapon shots for a Knight. Amrigers get Dakka with 2 amped up guns, and character gets a laser weapon like a Chimera, but you know, bigger.

Oh and if you like wolves, you will love the new knight character.

Codex fixes two problems with the Armiger, high points and weak to hordes in combat. Both new Armigers will cost less that a leman russ, and chainreaper will gain a multi-attack ability. Helverin gets dakka that taken over several models leaves any other walker’s firepower in the dust.


I have been thinking, a full Knight Army is pretty much 4 Knights (with two Armigers the same price as 1 Knight). And, that's not a very viable army. If the army could go 5 Knights (with three Armigers costing the price of 1 Knight), suddenly it looks a lot different, and potentially usable. 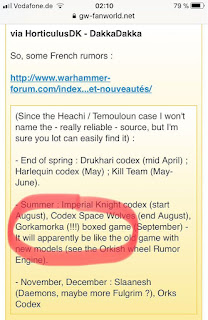 Guys I wouldn't get your hopes up for a June release. GW have already confirmed aos2, nighthaunt battletome, Malign sorcery, and more Stormcast all for June. The rumors I have heard say either 9th or 16th June with a two week preorder. If anything comes before them it will be bloodbowl dark elves which I have heard are coming very soon.


Warhams-77  There has been a bunch of new info on B&C. I collected them from several threads for easier reading
Hermanista is reliable. So far his info about Forgebane pre-announcement was very good/correct. He knows stuff and handles what he isn't sure about with the right carefulness. Good, helpful source.


Hermanista - B&C
Knight Valiant is happening, armed with some kind of spear weapon.
I'm so excited, just need these other inferior releases out of the way ;-) lol

Honestly, I don't know if it's an entirely new kit again or if it's built off the Castellan chassis.
That would make sense though I guess, in the same way we've seen the Armiger has a build and the sprue B, so assumedly there's a sprue A and possibly c/d etc etc.
Exciting times

The valiant I'm sure isn't Cerastus big. It'll be the same time as the Castellan give or takr.

There's 4 kits coming.
I'd expect Castellan and Armiger week 1, along with codex and dice
Valiant and Helliger week 2.
Unless they surprise us and do it all on day one.
Who knows, we'll see soon enough I suppose
Oh and Imperial Knight: Renegade at some similar time too.


PJ1933 - B&C Forum
Plus another £120 or so for the as yet unseen ‘big tall thin knight’ which I am reliably informed is coming along too, hopefully as part of the codex release but it has been spotted in the studio and it’s plastic not resin.


Definitely a bigger release for Knights


hermanista
I'm wracking my brain of the order they were presented on the release sheet, but I think it went
Castellan
Armiger
Valiant
Helliger

So I'd expect the first two one week, the other the week after.
The valiant is silver with a spear and some plasma type gun I think. As I think I've said before I'd expect it to be the character box as well.
I don't know if it's thin/lanky or not, and it was so long ago now that I'm wracking the noggin to remember the conversation.
The release sheet did have renegade on there as well, so hopefully that means a rerelease or an update?

And I was thinking May too, what came out last May? As it's likely from a sales pov GW will want to match last year's release with another similar level one to keep the pounds ticking overT


PJ1933
The height of the Valiant I was told was taller than the current model and the Castellan and I was reminded a couple of weeks ago because I said I was going to order a Cerastus - don't was the instruction just wait a month, maybe 6 weeks as it would be much easier to build a plastic version of that style Knight than messing with resin legs. Now it might be a staged release over a couple of weeks it might even have a splash release in between to give wallets time to recover I have no information on that at all.