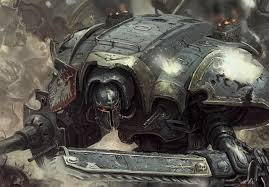 There is an incredible listing of point drops + weapon upgrades mentioned in this video. The big thing is that his information matches up on the release date with a very solid source here on Faeit 212.. which is pre-orders June 2nd and a release date of the following weekend!!!

Taken from the comments below.....
Warden roughly being 411 points rather than 466.
New super Knights are both in the same kit, will cost around 670 points each.
Armiger with stubber now 164.

Its a 7 minute video loaded with information.
Please remember that these are rumors....