The Harlequin codex is coming this weekend and with it are some previews of what we will see.

Nobody goes to war quite like the Harlequins, a faction so mysterious that they make their cousins in the Drukhari look like forthright, honest chaps. In the new Harlequins codex, this is reflected by a choice of six Masque Forms that provide some powerful – and unusual – bonuses to your Harlequins army. 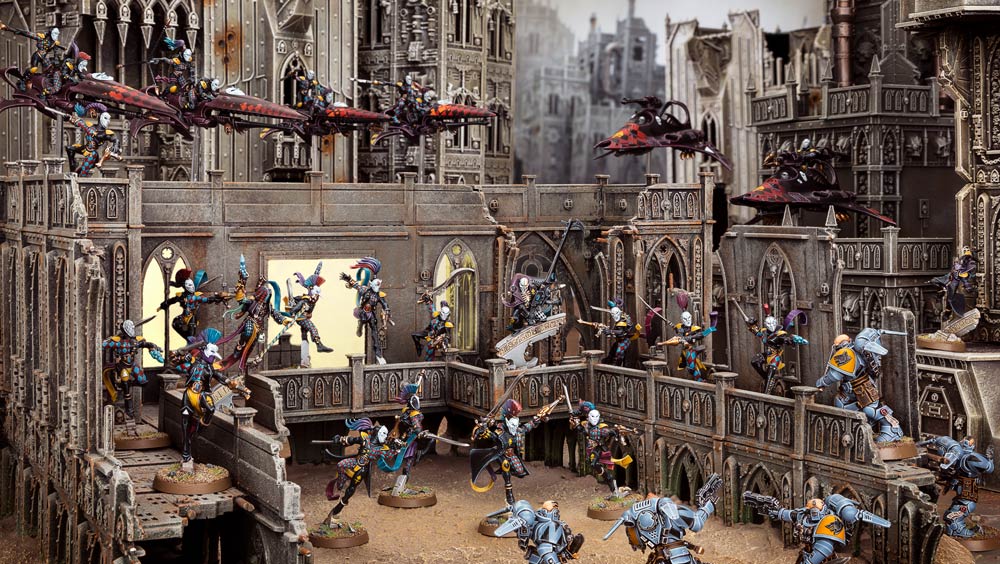 True to form, the Masque Forms are among the most distinct and unique faction rules we’ve seen in the game so far, each opening up a host of new tactical possibilities when it comes to customising your army and confounding your foes.
Today, we’re revealing ALL of those Masque forms to help you decide which you’ll use when the codex comes out – and perhaps, to tempt you to service of the Laughing God…

The Midnight Sorrow are warrior acrobats, using their immense physical dexterity to confound their foes at close quarters. On the tabletop, this is represented by The Art of Death, a Masque Form that makes you nightmarishly difficult to pin down once you hit the enemy lines.

Consolidating up to 6″ means that, when you blitz through an enemy unit, you’ll likely be able to chain into another one, proving very disruptive for any force that relies on shooting. Falling back an additional D6″ also has a variety of benefits; remember, with your Flip Belt and Rising Crescendo abilities, you’ll be able to move over models as if they aren’t there, before charging. Defensively, you’ll be able to put a LOT of distance between anyone that tries to pin you down, while offensively, you can wreak havoc behind enemy lines, using your Fall Back moves to get to the heart of your enemy army.

The Veiled Path revel in trickery, misdirection and deception – traits represented on the tabletop by an appropriately sneaky Masque Form: 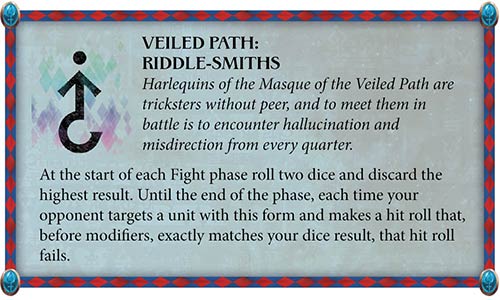 With a 4+ invulnerable save and a range of ways to mess with your opponent’s hit rolls, Harlequins can be surprisingly durable, with Riddle-smiths making you even harder to attack in close combat. If you’re looking to make your Harlequins last longer on the battlefield, this is the Masque Form for you.

If you’re looking for a simpler – but no less effective – Masque Form, the Frozen Stars allow you to make the most of your Harlequins’ close-combat prowess with Hysterical Fury:

Remember – Harlequins can Fall Back and charge, meaning you’ll be able to benefit from this several times during the game. By gearing up with powerful melee weapons like the Harlequin’s kiss (it’s a lot less nice than it sounds), you’ll be able to blitz through enemy units before they even have a chance to strike with a hefty 5(!) Attacks per Player on the charge for your Troupe units.

We’ve looked a lot at the Harlequins as a close-combat army, but these guys are no slouches in the Shooting phase, capable of wielding a variety of deadly Pistol weapons. The Masque of the Soaring Spite is the perfect pick for players looking for an airborne shooting army:

Troupes mounted in Starweavers will be very powerful with this Masque Form – as well as allowing you to fire your Pistols on the move, your shuriken cannons won’t suffer any reduction in accuracy for firing on the move. 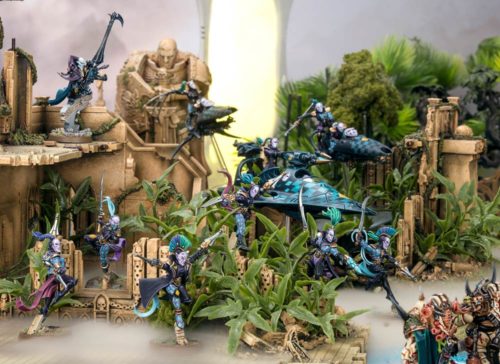 The Harlequins of the Dreaming Shadow are among the darkest of their kin, imbued with a grim sense of purpose. On the tabletop, this translates into a Masque Form that punishes your foe for any losses they inflict: 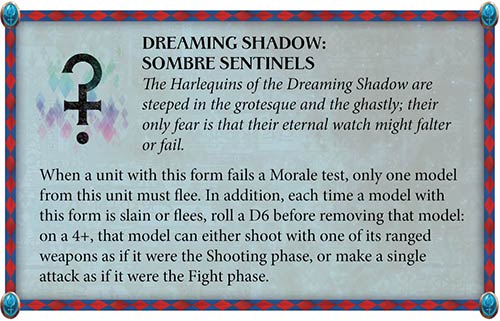 With this Masque Form, you’ll be able to throw your Harlequins into dangerous foes, safe in the knowledge that your casualties could well swing the conflict in your favour. We’d recommend taking larger squads of Harlequins, kitting them out with as many deadly pistols as you can and getting them into range as soon as possible – any foe looking to take them out could be in for a nasty surprise. 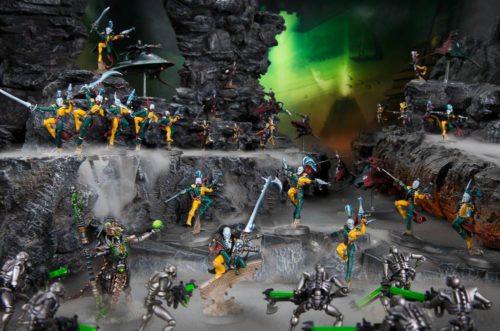 The Silent Shroud are the most terrifying of the Harlequins, and allow you to make the most of your Morale phase with an interesting Masque Form: 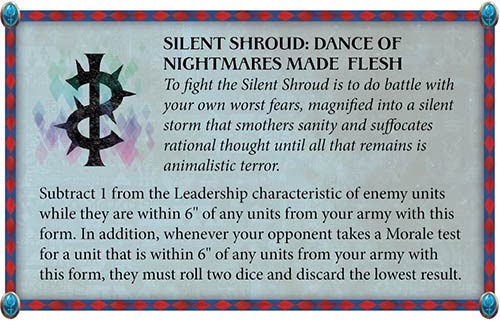 In an army composed entirely of Harlequins, this will work superbly with your Death Jesters, whose shrieker cannon can reduce the Leadership of target units, but where it really comes into its own is in a mixed Aeldari army. By combining a Detachment of Hemlock Wraithfighters with some choice Drukhari units from the Dark Creed Haemonculus Coven, you’ll be able to drop enemy Leadership by as much as 9 – enough to transform every single casualty into a devastating rout.
As you can see, the Harlequin Masque Forms allow you to create a diverse and unusual range of army builds for your Harlequins – and we haven’t even gotten into new psychic powers, Stratagems, Relics or Warlord Traits yet! Come back later in the week when we’ll be looking at these in detail – or start your Harlequins army with a Troupe, available online or in your local store.