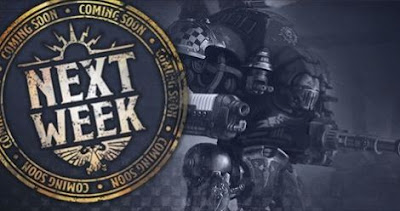 Imperial Knights are Coming..... Yes, that means most of our information earlier this week looks to all be very accurate. Lets take a look at what Games Workshop is telling for next weekend!!!!!! 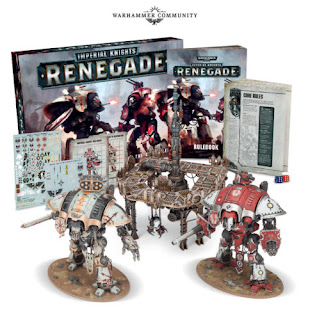 via the Warhammer Community
https://www.warhammer-community.com/2018/05/27/all-knights-great-and-small/

The wait is almost over – the Imperium’s mightiest war machines are ready to walk.
There’s nothing quite like an Imperial Knight – one part noble scion from the darkest reaches of mankind’s empire, one part giant freakin’ robot, these titanic warriors encapsulate much of just what makes Warhammer 40,000 so iconic. When the first Imperial Knights came out 3 years ago, they immediately became a favourite of Warhammer 40,000 fans and redefined the scale of warfare on tabletops everywhere.
Since then, we’ve seen all manner of combatants large and small join the battle for the 41st Millennium, including, xenos Knight equivalents, a pair of Daemon Primarchs – but now, the time has come for Imperial Knights to once again rise to supremacy.
Not only are the Imperial Knights getting a brand new codex, they also get a veritable household of new Knight patterns to bolster their already considerable strength.
First and foremost of these new additions are the Dominus-class Knights. These magnificent engines of war are amongst the biggest plastic kits we’ve ever made – each is a walking fortress, bristling with all manner of deadly ordinance. If you’ve been looking for a Lord of War for your Imperium army, this is it – devastate enemies at close range with then Knight Valiant or annihilate foes at a distance with the Knight Castellan. 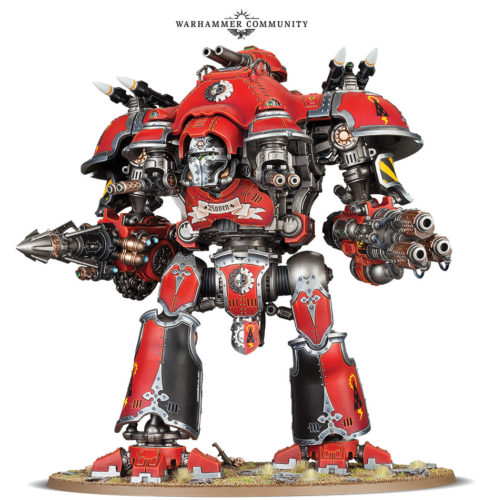 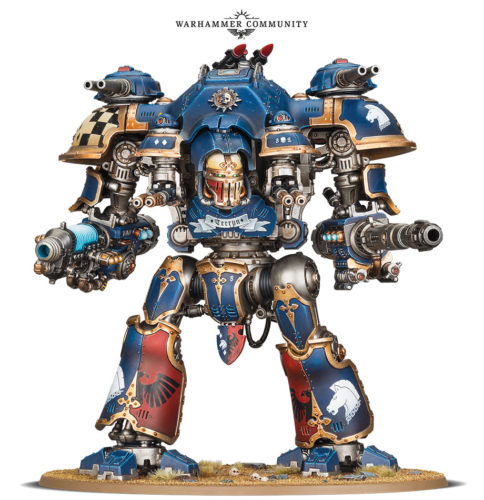 Looking for something a little (but only a little) more subtle? Look no further than the Armiger Helverins – fast-moving, long-ranged fire support that’ll have a place in any knightly house – or just an Imperium army that needs even more guns. Like the Armiger Warglaives, you can get three of these guys per Lord of War slot, making them ideal for rounding out a larger Detachment of Imperial Knights. 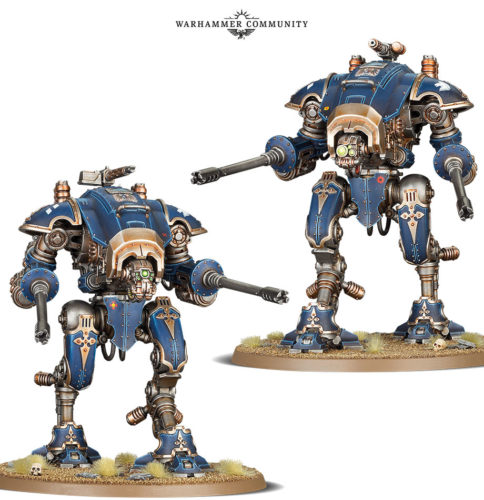 You’ll find the rules for all Imperial Knights in the new Codex: Imperial Knights – alongside a rich collection of rules that allow you to realise your Knight household in greater detail than ever before. 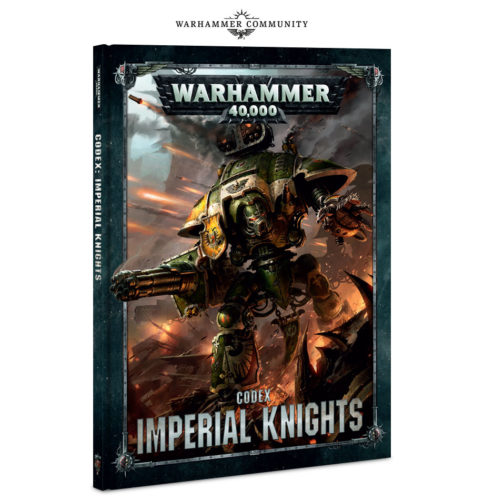 The personalities of each household – nay, each Imperial Knight – are as diverse as the Chapters of the Adeptus Astartes or Regiments of the Imperial Guard, and now, you’ll finally be able to represent that on the tabletop with nine new Household Traditions. These powerful faction abilities let you customise your collection to suit your play style.
If you prefer to go your own way, well, you’re in luck – the book ALSO features tables for generating your very own Freeblades, complete with epic, tragic backstories. Build your own from the traits you like, or throw caution to the wind and roll for them – you could, for example, end up with a Freeblade who fires with unerring accuracy… but also occasionally falls into murderous rages where he is forced to charge the foe. These rules are thematic, fun, and really let you go to town in bringing these characters to life. 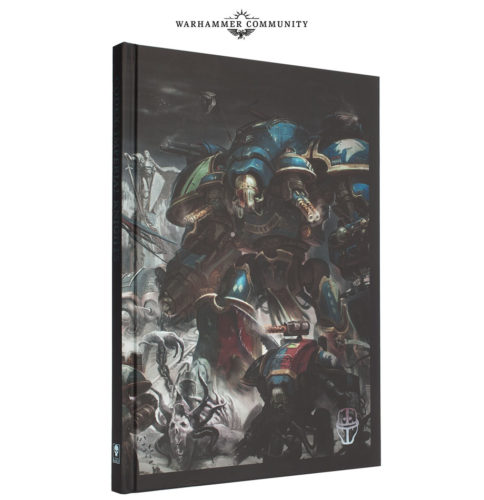 It says a lot about the Imperial Knights that even their accessories are awesome. Like with previous codexes, you’ll be able to grab some themed dice (you can never have too many) and some datacards for keeping track of your Stratagems (of which there are LOADS in the new codex). What’s more, there’s a set of datasheets for referencing your units on the go, plus a beautiful stainless steel Battle Gauge, featuring all your essential distances to make measuring simple. 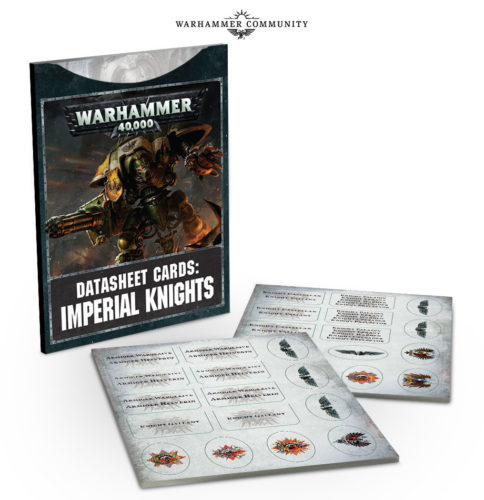 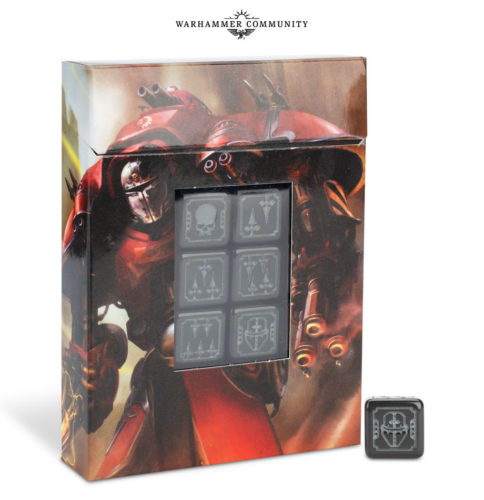 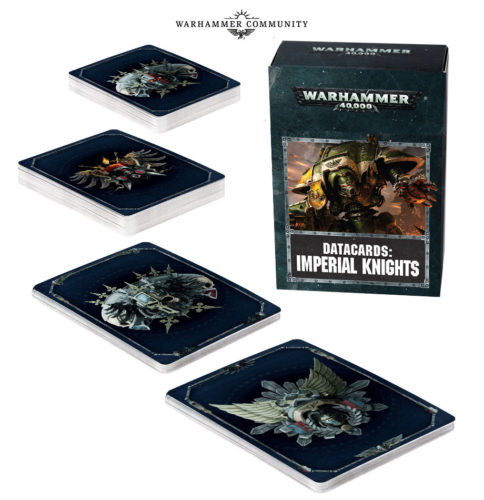 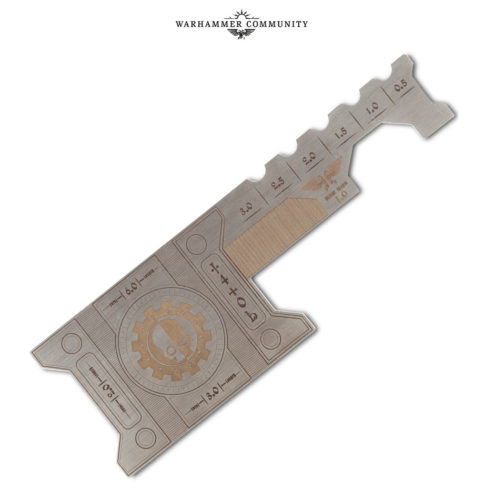 What if you’re looking to grab some classic Knights to add to your army? Perhaps you’ve been inspired to finally bite the bullet, or perhaps you just fancy some more Knight Paladins, Knight Wardens and so on. Well, we’ve got some great news – Imperial Knights: Renegade is coming back, and it’s going to save you EVEN MORE money than before!
For those of you that missed it the first time, Imperial Knights: Renegade is a boxed game that pits two Knights against one another in epic combat. As well as being a great game in its own right, the set costs much less than buying two Knights on their own, AND even features some scenery – we’ve swapped out the older Sector Imperialis stuff for a shiny new Galvanic Magnavent. This kit’s a pretty appealing option for Chaos players too, as you’ll be able to field both Knights inside as Renegades using the rules in Index: Chaos. Handy! 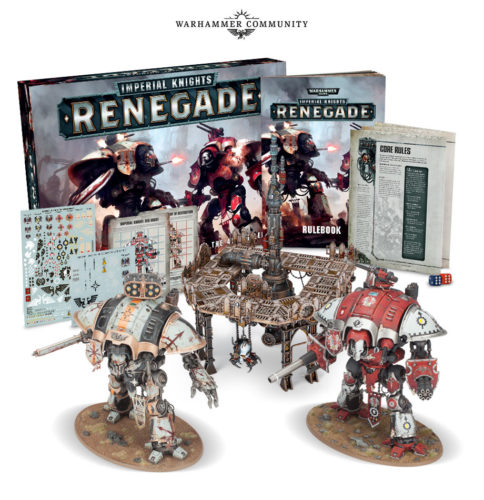 Last, but not least, the hobby team thought it was high time the Imperial Knights got some scenery of their own. The Sacristan Forgeshrine is a battlefield repair-and-reload station that’s a great choice in any Imperial Knights army. Used defensively, you’ll be able to keep your Knights in the fight for longer. Used offensively, you can ensure that your weapons with a random number of shots (like the volcano lance wielded by the new Knight Castellan) always perform at maximum effectiveness.
5/27/2018
Natfka
8th Edition, Imperial Knights, pre-orders, Warhammer 40k