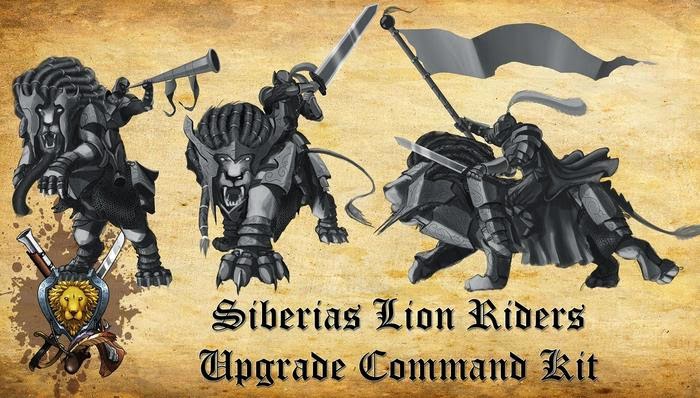 Shieldwolf Miniatures is on their last hours to support their kickstarter. With the ups and downs on it, they are making a final push, and unlocking many of the items that people are interested in. This is great news, as additional freebies and new items are added to what you can get by supporting this project.


Not to mention that they also ran a wonderful giveaway here on Faeit 212. (if you are one of the winners and not contacted me, please do so.


Here is a link to the latest news and their kickstarter
https://www.kickstarter.com/projects/1273312680/shieldwolf-war-is-coming/posts

Hi all! :-)
We know this project has very few days remaining but we want to once again let everyone know how much we appreciate the confidence placed in us :-)
So, we have been preparing and doing a whole bunch of calculations to see how this should be better conformed before the end of the campaign, after which we wouldn't be allowed to do/show anything.

Regardless of how the campaign finishes, we have already proceeded in sculpting a number of miniatures and commissioned even more. After receiving multiple messages and according to the comments in the front page, we find it of little to no use not to unlock a number of items many of the backers seem interested in. We would like to note that we still prioritize the creation of further plastic kits and therefore this was taken under consideration. We mean to co-fund future plastic kits, starting with the next KS project, in order to make sure it's a reasonable target. Here is the final decision:

(this is also valid for everything else that is currently unlocked, meaning twin-headed Dragon, Shieldmaiden rider etc. We are sculpting these as we speak, therefore we intend to make them available even if it means co-funding them ourselves, as long as the project is succesful we mean to assist as much as possible all backers!)

During our initial plans we had a huge number of freebies aligned but the pledge total doesn't justify having that revealed -let alone released/unlocked!
Our calculations however have allowed us to do be able to deliver some of those freebies, even if they haven't been unlocked. It's the least we could do to repay the faith.

We will probably (meaning 99%) be including some type of freebie for the Orcs too, but we have not decided yet what that shall be. It will depend on what the pledgers ask for so we can act accordingly both to number and type of reward.
For the Command group of the Human Monstrous Cavalry, here's what it's going to look like :-)

And for the "slightly overweight buddies of ours", this is a picture to show you better what you'll be getting. At times of war a Champion always has time -and space- for some extra loot... :-)

As you already know Shieldwolf Miniatures has been created with ultimate goal to release and support an army game. For that purpose, a large muber of miniatures will be necessary, and with your pledges you' ve demonstrated the immediate support for this. We believe to be able to complete the entire Talliareum Ogre army within 2015, being a Mercenary army and not including any plastic kits. Even if this campaign hasn't finished, Davide Tedeschi has been commissioned since 2014 to complete and make it into a reality. Here's a sneak and rough peak of what he's currently working on (yep, he's not fully dressed yet!)

As for the 2-headed Dragon of the Northern Alliance, the riders have both finished and Olivier Nkwetti is on top of this to add all the necessary details in order to deliver the best twin-headed dragon ever created. By the end of this month, it should be finished!
3/10/2015
Natfka
Kickstarter, News Headlines