Skitarii Model Instructions Come With an of the Onager Dunecrawler 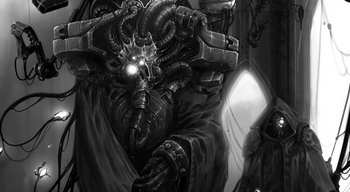 Inside the boxes, I am assuming that come with the model instructions, is a pic that is the latest discussion for the Skitarii. While I have not seen this leaked to the internet yet.... its interesting because it reveals only the Onager Dunecrawler, along with every other release we have seen thus far..., but no HQ.


Here is the latest in the Skitarii Rumors.

via an anonymous source on Faeit 212
On The skitarii building sheet (or whatever it is named in english), is a black and white picture of all the new Skitarii models.
Two Onager walkers along with Vanguard, Rangers, and both of this weeks unit options. They are fighting Tau Warriors.
No other new models are shown. Most likely saying that this is it.