Skitarii: What's Next, and Will the Skitarri Borrow Units from 30k? 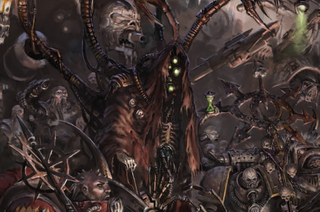 The Skitarii have hit us hard yesterday and today, with 2 new dual box sets, rules, and pics to give us some insight into just what codex: Skitarii will bring. Hastings himself has said that this will be a "full release". So what exactly how big will this codex be?

What we do know from leaked images and rumors, is that the Onager Dunecrawler, which is most likely a dual kit, will be coming most likely next week. Despite what some sites are saying, this release is more than a single week release. Obviously we are getting at least one more week, as the codex has not hit yet. There Is a codex coming for this release.... I guarantee it.

It is quite possible that this codex is not going to be a full faction codex. Games Workshop does not need to fill every part of the Foc with units and options anymore. I would assume that from Hastings knowledge of how big the releases are, that a full release is much bigger than three kits.

Even so, there are some serious holes in the force if we are left with the heavy support Onagers, and the two kits from this week. HQ for instance is a huge one.

What I really hope is that the codex does not borrow on other faction models.. like SM rhinos or IG. If it has to borrow from somewhere.... Forgeworld has an excellent range to borrow from for their Mechanicus forces.

To borrow from 30k would be very cool, as I could see the Skitarii being not only a 40k army, but also used in Horus Heresy games. So borrowing back and forth would make it a very unique army, with a great aesthetic. With the rumors and re-directs showing Forgeworld pages being held on the GW webstore, this could be a catalyst for the Skitarii to be comprised of both GW plastics and Forgeworld Resins.

Of course we wont know for another week or so just how big the skitarri release will be, but I do expect it to hit at least its 3rd week.