Going Back to the Basics: Scourge Tactics

Lately I have been playing Dropzone Commander with the latest Hawk Wargames releases (famous commanders etc, and to check out the new rule updates. So when I started thinking of what I will play in the upcoming Nova Dropzone Tourney I went straight for the basics.

A quick note though, is that I am not sure what faction I will playing yet. 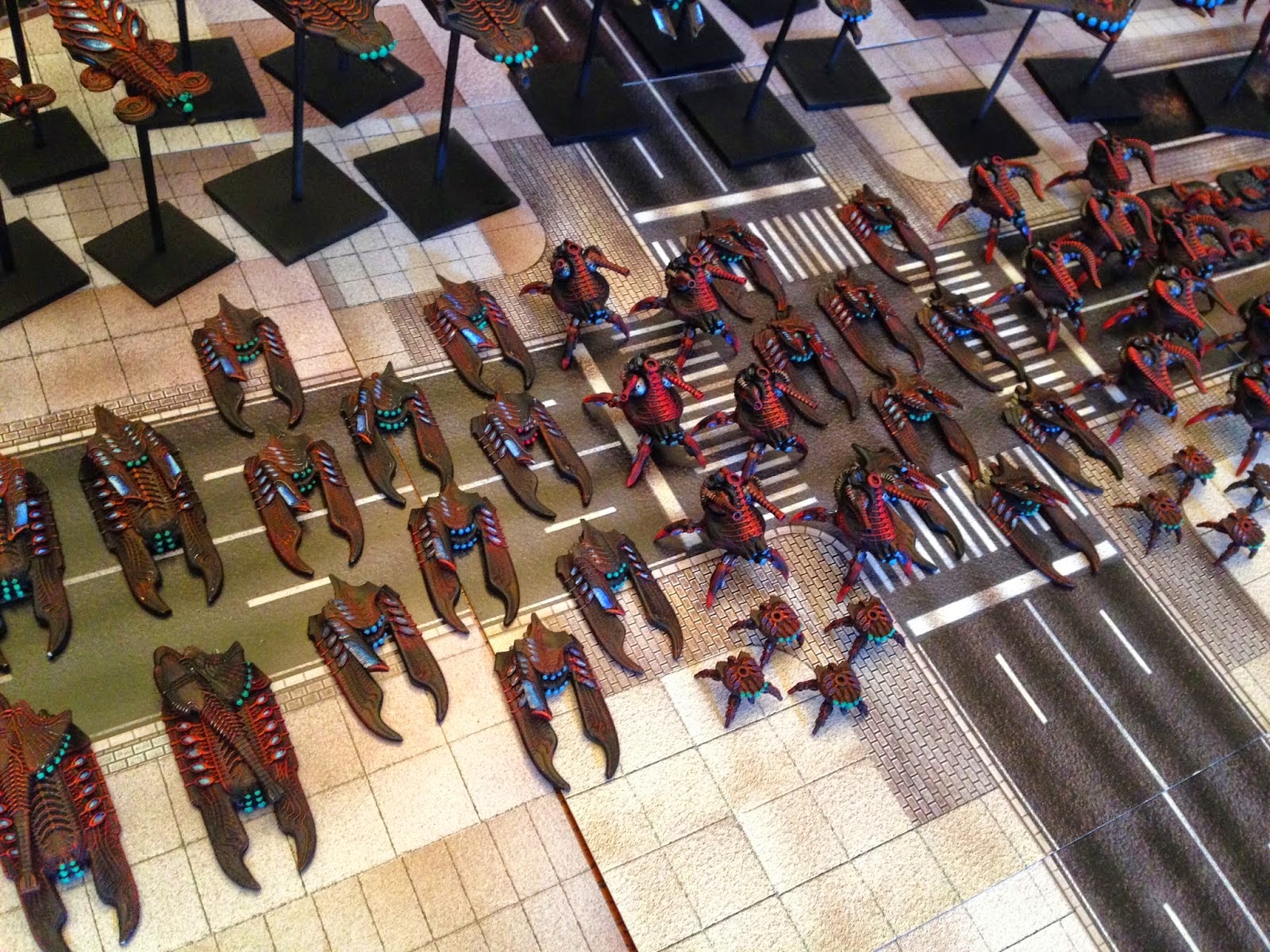 So I got out my Scourge Hunters and Reapers, and tacked on the standard Desolator. What concerned me, is my opponent brought what I would deem an extremely strong list, and as he was unpacking his Resistance, my thoughts were whoa, Im out gunned in every arena (tank and AA). Here is what he was fielding... or close enough to it.

NT-4 Leviathan filled to the rim with 2 full 12 vehicle squads of Rocket Technicals. The Leviathan was outfitted with full AA protection.
4 M9 Hannibals with Lifthawks upgraded with the AA mount.
2 M20 Zhukovs with a Lifthawk and AA
M3 Alexander Commander with Lifthawk and AA
NT-1 Kraken with two battle buses with AA batteries.
the first was full of 4 Resistance Fighters
the second with 4 Occupational Veterans

The last part I think he had some 3 gun wagons in a Kraken, but I may have been mistaken on this last part, as he had a level 2 commander in there.

So he was strong in every arena although a little weak in infantry mobility. Everything had AA though, and it was a little nuts.

The Ground Battle.......
Now the first rounds had me dividing my forces to the left and right, as we started off in a 5 focal point mission (bunker assault) and him running his leviathan and hannibals right up towards the center of the board. Being Scourge I wanted to jump out at him fast, and put him on the defensive (and hence limit his mobility)- get him to castle up. This worked, but also put me in a bind. Really... what can you do against 24 rocket technicals, 4 hannibals, and his Alexander.

I was able to hit first, and struck at this Hannibals, getting the first kills with my hunters as they struck from two different sides. His return fire though with all the rocket technicals did some serious damage. Skimmers bonus's + decent positioning though saved a good number of them.

While I was trying hard to reach his Zhukovs..... those are dangerous things to have around a Desolator, he moved everything ahead of them to keep them out of site, and dropped a command card on them to protect them with a 5+ passive.

To counter this, and to hopefully take out some of that massed technicals, I dropped all my warriors into buildings to get some 12" plasma shots at them. Which caused him to back up a little out of the center of the board to avoid their shots.

I continued to press on with my ground attack, and by round 5 it was spent. On the plus side I had reduced his technical push to about 25%, and had taken out all but one of the Hannibals.

The Air Attack.......
Following up on the ground push, I sent my reapers out behind the hunters. Their job was simple, remove the lifthawks. With Armor 6 and 4 damage points, lifthawks can be quite the burden to take down. The two squads of reapers were devastating to them. Everytime the reapers shot, a lifthawk was downed. Of course 6 energy 8 shots from a squad of three.... and an accuracy of 2+ is deadly. Even missing one, two reapers never missed downing their targets. Of course being the fast AA assassins they are, I was trying to crash the lifthawks onto targets beneath them.

The last lifthawk tried retreating from the center in round 5 but was chased down from the side and removed from the game.

The Desolator.
I had tried to manuever my Desolator around (even going to the deck) around small buildings to get to the bulk of his army. This included being shot at by reaction fire from the Zhukovs early on. Averages struck, and one Zhukov hit and did two damage.

As the later half of the ground was unwinding, and the reapers had downed most of the lifthawks, it was time to move in with the Desolator. It was a huge risk, as I was not going to be close enough for get much within 6" (mostly the leviathan and nothing else the first round). I blasted along with a card to re-roll... hoping to take things down, but alas, even with a re-roll, minimal damage was done.

Round 5 it was time to take a chance. I moved into the middle of the fray..... and the Zhukovs fired again in reaction fire and missed. (if both had hit, I would of been easily destroyed.)  This time a number of technicals, a Hannibal, and some other damage was mitigated to the enemy.

Round 6 came around, and the Zhukovs got their chance to finally take down my Desolator as they had the jump on me. I knew she was done, but when rolled out...... only one of them hit (the other rolled a 1). Again he did only two points of damage! (lucky). This allowed my Desolator to drop a third blast and damage quite a bit. The command Alexander had taken 3 damage from the blasts.

Wrapping it up!
With 5 focal points on the board, I had managed to dump razor worms into bunkers, drop my surviving reapers back, and get infantry into several of the bunkers. With the Desolator surviving.... which was hard considering the leviathan did another point of damage to it... leaving it with 1 left!. However, that gave me someone at each of the 5 focal points. he was able to get models to the center bunker, and obviously with 1 surviving zhukov and his alexander, veterans, etc he had his corners focal point.

Final score came down to 9-3. Kill points had me @230pts or so ahead . There was a lot of dead in this battle. Even at the very end, I had figured he would be able to reach a few more victory points.

Conclusions
The standard hunter/reaper list worked well, even being out gunned. The skimmer bonus's really came into play as the rocket technicals needed 4's to hit them, really reducing their Focus-2 bonus's. Positioning as well helped, as any model that was behind another made it hard for the opponent to push deep into the skimmer ranks, as those required 6's to hit (cover).

Obviously hunters hit hard. I forget just how hard sometimes. E11 shots are powerful, even against A10. Don't forget the Reapers.... taking down lifthawks really limited last round mobility, and two squads of them, really put the hurt on any lifthawks that were not in the backfield.

ps. I had not planned on doing a write up, so I was not taking pictures or videos. However, looking back at the game, I thought it was worthy to post up, as it puts the more traditional Scourge units against all the new stuff of the Resistance.