The Blood Tithe, Bloodthrister with Strength "D" Attacks, and Hints of Admech! 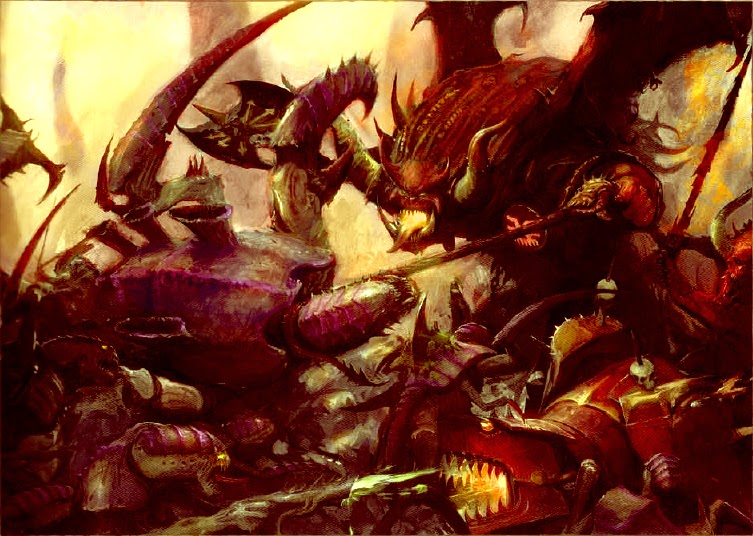 Are these hints of what is in this week's White Dwarf? It seems that someone may have it or has at least seen it. In this is mentioned a Bloodthirster variant with a strength "D" close combat weapon, units listed of what may be in the codex, and next week's hints (Admech).... All from the White Dwarf


I know a lot of readers dont read comment sections, so this is what is being said currently. Of course we will know for sure soon, but this may be some pre-leak insight.

Please take these are rumors. I have not spoken to Endemion behind the scenes, this is just what he has commented.

Khorne Daemonkin
EndemionMarch 17, 2015 at 5:54 AM
Sadly no, just a new "Army Wide" Blood Tithe rule, keep a running tally of *All* unit deaths, these are points you can spend of special Khornate boons, including summoning Daemons, up to and including a Bloodthirster (One variant of which has a "D" Str melee weapon).

Endemion   March 17, 2015 at 6:07 AM
Guessing from all the stuff hinted at/talked about/in pictures in the White Dwarf as it's not actually stated 100% for most of them, it'll be...
Chaos Lord
Normal Marines
Terminators
Forgefiend
Maulerfiend
Defiler
All the Khorne Daemons
Soul Grinder

That's all that's mentioned that I can see, could be other stuff like Raptors/Obliterators etc but just not mentioned in white dwarf.

Does hint that all the Daemons might *not* have Daemonic Instability


Endemion  March 17, 2015 at 7:58 AM
Nope, it's mostly just hints about what's in the Codex, while talking about their special rule. I did forget cultists though, they are in there as well.

Even The White Dwarf Bloodthirster rules are the ones to go with Codex Daemons, they aren't the rules for them from this new Khornate book.

Fill in the blanks!