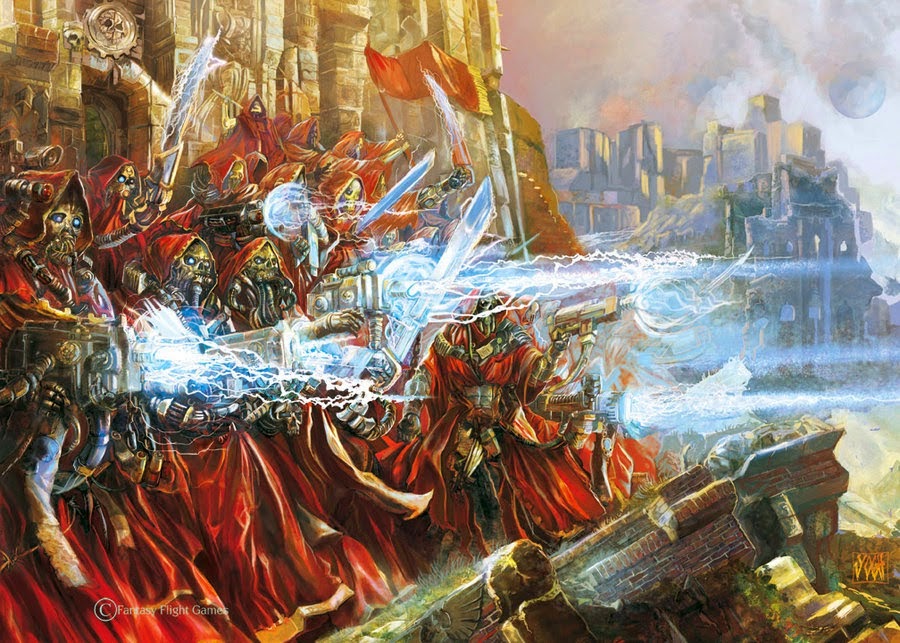 This morning the leaked images show the latest Admech Skitarii model releases, along with their rules. The only issues being that they are in German. I will be finding some in English asap, so that we can get a better look without having to translate. For now, non-German speakers can check out the models.

Tombard on Dakka seems to be the source of the new pics.

Here is a good place to find the pics.
http://www.talkwargaming.com/2015/03/news-more-skitarii-units-revealed-rust.html
http://www.bolterandchainsword.com/topic/302401-rumours-mechanicus-skitarii-this-week-sicarians-codex/page-36#entry3993164


via Endemion in the comment section on Faeit 212
Some bits regarding this week...

The "coming next week" in White Dwarf states "It crawled from the Dunes"...

This new Unit has 2 options both are 2 wound models, one is a infiltrating power sword wielding unit, the other Is a furious charge unit armed with "Transonic Razor & Chordclaw"
Transonic weapons are... odd to say the least, they work by finding the resonant frequency of what they hit and tune to it, so they get better in the second and subsequent rounds of combat.

Also as I saw something about this elsewhere in the comments, yes there *is* a limited edition Codex.
Er, also also... the Skitarii see to have Imperial Guard... sorry, Astra Militarum style army wide "Orders" rather than Psykers (Obviously).


The infiltrators have pistols (two options, one is 3 shots one is 5!) The Ruststalkers only have grenades.


They are just infantry (though Bulky)

The Infiltrators ones do have kinda... dome heads with eye lenses and tubes hanging out that I guess give a spiderlike impression.

The Transonic melee weapons are only AP 5... but they auto wound on a 6 at AP2, plus they go to base AP2 from second round of combat onwards and still keep the auto wound on 6 rule.

That's their weakness, the Infiltrators have infiltrate (Suprise!) And Stealth though, plus a.special rule that lowers all enemy WS, BS, Initiative and LD within 6" by 1!
As these guys are WS4 & S4 and have Power Swords, they will murderise Astartes in Assault I think, if you can get them there.