The Latest on the Nagash Book: Pre-Orders 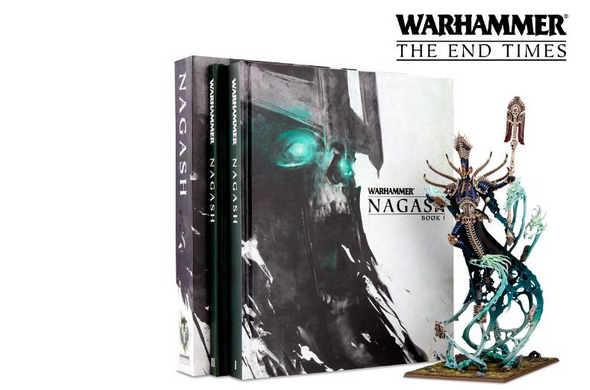 Now already up for pre-orders, Nagash Book 1 will include rules for Valten, and a Chaos Warrior Champion. By far, Nagash is a top notch model with amazing detail. I have the old one, and there is just no comparison.


via Steve the Warboss on Faeit 212
The Nagash Book includes rules for Valten and a Chaos Warrior Champion (not Archaon).

via Games Workshop
As Nagash plots to unite all the Undead of the Warhammer World under his supreme command, one thing is certain: nothing will ever be the same again.

This Webstore Exclusive edition includes five art prints within an art wallet and an annotated map which expands on the fateful events following Nagash’s return to unlife. The terrifying new chapter in the history of the Old World is revealed over two mighty hardback tomes which are presented together in a magnetically sealed slipcase which is detailed with a spot-UV varnish.

Warhammer: Nagash Book 1 is a 296-page volume which provides a narrative sweep of the events surrounding the return of Nagash. From Bretonnia and the Empire, to Nagash’s birthplace in the Land of the Dead, vast battles are fought, the dead rise and the world changed beyond recognition.

Warhammer: Nagash Book 2 is a 96-page volume that contains new scenarios and rules based on the events in Warhammer: Nagash Book 1. It includes the full rules that will allow you to field Nagash and his loyal subjects - along with all-new rules for some of the most powerful heroes of the Old World, such as Valten and Vlad von Carstein - in your games of Warhammer.

Armies of the End Times can also field more Lords - to up 50% - and the brand new spell lore - The Lore of Undeath - allows every wizard, mage and sorcerer to wield the fell magic unleashed by Nagash. There are also army lists that allow you to create a unified army of Tomb Kings and Vampire Counts known as the Undead Legion.
8/22/2014
Natfka
New Releases, News Headlines, Warhammer Fantasy