Leaked: What is Included in Undead Legions 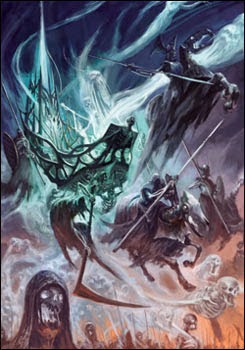 The Nagash book is leaking, and what units from both Tomb Kings and Vampire Counts that can be used in the new Undead Legions is being revealed.


Check Here for the Leaked Images, and more Details.
http://astropate.blogspot.com/

via Antihierophant on Warseer
The Return of Nagash is up on Black Library for advance order and there is a sample up too. The sample's prologue sets up a lot of the End of Times world so I thought I'd share that with you here. The framing is Manfred scrying in a bowl of blood and looking around the world. These are the main things he sees in order;

-A twin tailed comet
-A "storm of chaos" sweeping the world; random deamonic manifestations are popping up all over the world. All small and lasting only a short time.
-Valkia is leading a huge Khornate army against Naggarond
-Massive daemonic incursion in Lustria. The jungles burn.
-Huge daemonic invasion of Ulthuan.
-In Brettonia Mallobaude, the bastard son of Leoncouer, leads a joint army of disgraced knights and the undead (backed up by Arkhan of all people) kills his father.
-Deamonic invasions of the dwarf hold Copper mountain and Neferata's Silver Pinnacle, but the deamons just pop out of existance half way through the battles.
-Massive Nurgle-y plague in Middenheim
-In Athel Loren the Vaults of Winter break open and the great trees, including the Oak of Ages, split open to reveal they are filled with maggots.
-Gotrek chopping up beastmen in some Kislevite city. No sign of Felix.
-Another daemon invasion in Averland. This one too, just disappears as soon as it hits the walls of Averheim.
-Massive stone monoliths, big as skyscrapers grow out of the ground around the world. Become focal points for beastmen to flock to them.
-Riots in Nuln. Nobles attacked and either hanged or torn apart. Implied death of the Countess.
-The Tsarina is still alive in Kislev leading a counter-attack against Chaos horde.
-The Green Knight takes off his helmet and is revealed as Giles le Breton returned (later in the sample it says he killed Mallobaude).
-A multi-province Empire army defeats a Chaos army lead by Vilitch the Curseling as he besieges them.
-Chaos hoarde attacking the Great Bastion.
-Tomb Kings, Dwarfs, Greenskins and Orges all readying for war and Skaven launching large scale invasion on Tilea and Estalia, quite successfully.
-At the north pole 4 impossibly gigantic deamon armies are forming. 4 Exalted daemons bow to Archaon.

Not sure how much of this is just narrative and how much will become official fluff, but some interesting ideas.
8/24/2014
Natfka
News Headlines, Warhammer Fantasy