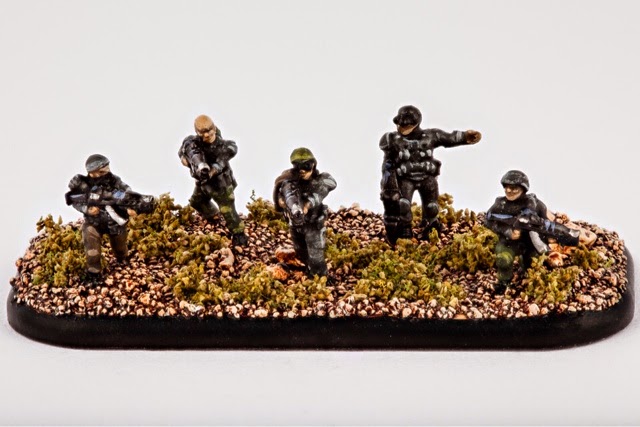 The details of how to build a Resistance army list are going to be extremely varied from my reading over the new Reconquest supplement. There seems to be a large number of good builds and directions to take your new Resistance army, possibly even more than the other factions.

Resistance Fighter are the standard infantry choice for the Resistance, and they are going to be a force to be reckoned with. In CQB =close quarter combat these infantry very much equal the UCM or Scourge with an armor of 2 and CQB of 1. They do have the subterranean rule which is fun, but it's their gin that are exciting.

Their assault rifles have the small arms-6 rule, but they also come with 5 E6 shots that have sc and focus -2 rules. Of course their range is limited, but with focus -2 you can quickly get a high strength shot with some punch.

Load them up on a battle bus and their MOve Fire of 0 now becomes 6" and they can fire our of the bus.

Balance is key though in Dropzone and those rpg's are only L-1. Not to mention firing out of a battle bus gives you a +1 accuracy penalty. However apply those concepts to the exotic occupation veterans and you have some very deadly battle buses running around with captured Scourge Plasma Rifles.

I am seeing lots of fun and exciting ways to build a Resistance list. We will be talking a lot more in the coming days on more fun with DzC.
8/21/2014
Natfka