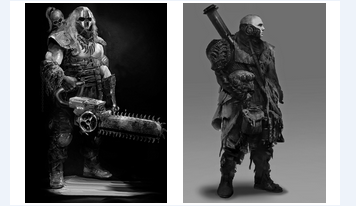 We have been looking at the Dropzone Commander's, "famous characters" from the new expansion Reconquest Phase 1! There are some very nice commanders here, and now for the first time we are going to be discussing them with a little more in the detail department.


The new Famous Commanders in Dropzone Commander are all going to be getting their own modified models or unique models according to rumors. This makes sense, which I will be discussing at a later date.

Each Commander is listed under their own faction at the end of the units section. They have a very high cost, come with their vehicle and/or models, and add new cards (not yet released) to your command deck.

Here is a taste of what is coming for both the Feral Resistance and the Scourge!

Gunnarr of Elysium, the Ferryman is only a CV value 2 commander, but is described as a true psychopath. Himself and his crazed followers are known as the Myrmidons. They fly in on a specially modified Armoured Lifthawk , and consist of 4 bases of infantry. These guys are nuts with a CQB of d3+2 and a dodge of 4+.

Salakahn, Tyrant of Atlantia is much more of a commander with a CV5. He is a merciless despot, and rules the Resistance forces in Atlantia. He gets to ride huge and massive M3 Alexander Command Tank, which gains an additional dp and a passive countermeasure of 4+. With him leading all Hannibal and Zhukov tanks cost 5pts less. Also Alexander command tanks can be taken as heavy, and Hannibal battle tanks as standard. Truly a tank commander with an inspiring presence on the field.

Eden's Dinosaur is from the original host species (lizard race) for the Scourge when they first invaded Humanity. He is mounted into a Scourge Desolator with a different weapon layout and E+2 (Evasion Countermeasures-this means adding two to your die roll to hit). Instead he gets 6 E10 shots with the new strafe rule. Besides his awesome new energy beam, he allows the Scourge player to re-roll your initiative each turn.

The Cavebreaker pilots a modified Annihilator that changes the artillery piece to Command, gives it E+1, and a MF value of 9". Stalkers, Prowlers, Slayers, are all reduced in points with the Cavebreaker leading them, but no desolators, hunters, or reapers may be used. Oh yea, did I mention that Destroyers at +5pts can be used as troops?!


Thats it for now, and I have a full first look at the new book uploading soon to the youtube channel later tonight, as well as more information coming. Its going to be a full weekend with a lot of Dropzone Commander!
8/15/2014
Natfka
Dropzone Commander, Hawk Wargames, New Releases, News Headlines