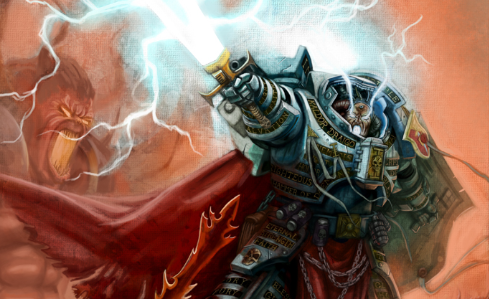 There was a series of leaked White Dwarf images that came out a yesterday and the day before for the new Grey Knight codex cover and releases. It seems that while we are getting a new codex going for pre-orders this week, there are a lot of repackaging releases hitting the shelves. One of the more interesting things, is that we will get a dataslate for Assassins, once again allowing them into any imperial forces.


This all matches up with the rumors we had through the last weekend.

It just so happen that I had my first chance to go crabbing in years, so was in the pacific ocean during the day, and a crab shack with cot at night. Of course leaked info is always released the first time you step away.


via an anonymous source on Faeit 212
got a look inside the white dwarf regarding the grey knight releases. the codex cover is a grey knight terminator with a halberd posing in the rain.

the box arts of the new releases are in the white dwarf
it is really nothing new. nothing except for one thing:

Strike squad box: as excpected a repack. 10 man inside.
Purifiers: repack aswell, 5 man inside.
dont know in which of these are the interceptor backpacks.

all 3 of those releases are just repackaging it seems to fit the new dark blue packaging all new boxes got now. just a different color on the models shown, thats all.

but the new thing is:
Dataslate Oficio Assassinorum.
so now everyone gets easy access to temple assassins.

hope this does not spoil the mood of some of the guys who thought there would be a new big release with the landraider, stormraven and dreadnought.
8/14/2014
Natfka
40k, 7th Edition, Grey Knights, New Releases, News Headlines, Rumors, Warhammer 40k