Infinity the Game: An Introduction Infinity the Game: An Introduction (Guest Article by Ed)
Hello, and welcome to my brief introduction of the 28mm sci-fi skirmish game, Infinity by Corvus Belli. In this article I will discuss what the game is, a little about its background and hopefully give you some of the reasons why you should be adding this growing but still underappreciated game to your tabletop rotation. Please note that this post has been written as to explain the key concepts of the game to new players, looking at the basics of core mechanics for the game.


The Fluff:
Infinity is set in our own universe 175 years in the future. Mankind has exhausted the resources on Earth and has gone forth into the cosmos to colonise other life sustainable planets. However, we are not a united people with the disparate nations and cultures from the present day amalgamating into mega civilisations and cutting the galactic map into territories as quickly as they can in order to gain the most resources and become the dominant power.

Despite this, on the surface of things the future for mankind is bright. There is no open war between the factions living on the twelve inhabitable planets and a galactic senate, the O-12, has been established to create a stable and lasting peace policed by a neutral artificial intelligence and its cybernetic operatives.

Underneath this seemingly civil facade each faction sends out its most skilled operatives on missions of sabotage, espionage and assassination to ensure their own goals are achieved from the shadows.

There is also the new threat from outside humanity that has just been revealed through the openly aggressive Combined Army, whose sole purpose seems to be to simply conquer and destroy all in its way, and the duplicitous Tohaa who have sued for peace with humanity but have unseen agendas that could quite as easily save humanity as send them to their doom. 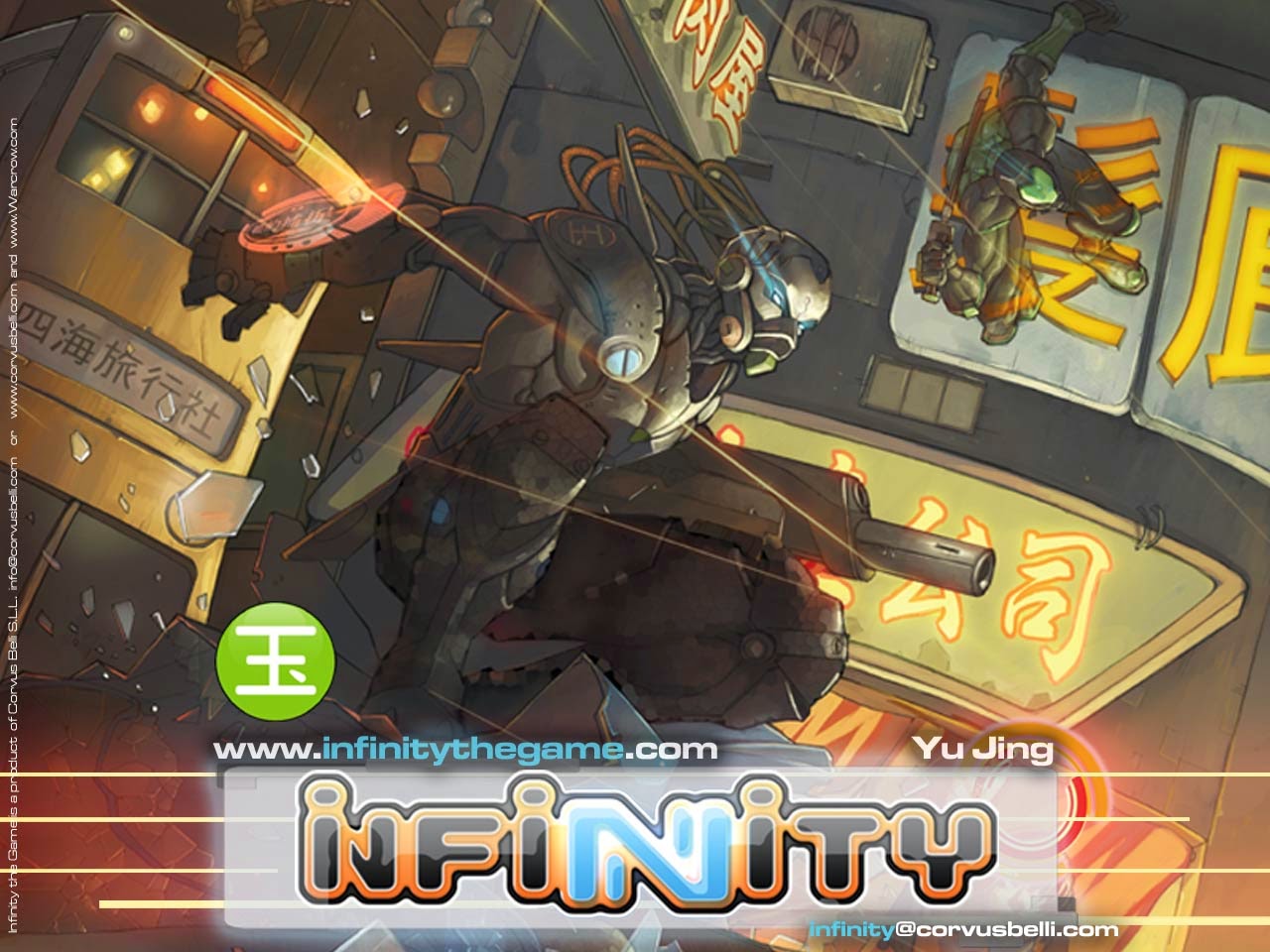 What is Infinity:
As I have stated, Infinity is a 28mm tabletop sci fi skirmish game. An average size game (300pts) can contain anywhere between seven and fifteen miniatures per side (this can sometimes be more and sometimes be less depending on the force and the player). A game lasts three turns in which each

player gets to activate their models in each round. There are many mission types available to play ranging from annihilation to objective based scenarios which offers players a lot of choice and variety of game types.

How is it different:
What sets Infinity apart from other games available today is the amount of tactical freedom it offers players through its core mechanics that make you think about both the large and small decisions that players have to make throughout the game. Here is a simplified description of the key elements of the core mechanics of the game:

* Order Pools: Each miniature you have generates an order that you can spend to activate a unit in your army. Orders are used to move models, to shoot or to do any other action available to you in game. However unlike other games, the orders created by models in your force do not have to be spent on the miniature that generated it, meaning that have the freedom to activate a unit as many times as you have orders remaining in your own turn. This mean that if you need your heavy weapons guy covering a fire lane half way across the board, he can get there, or if your sniper needs to take down multiple priority targets, she can in the same game turn. This is massive, as it allows you the flexibility to have your force react to changing situations, hopefully using the best tools at your disposal to deal with your opponent.

* The Automatic Reaction Order (ARO): In Infinity, it is always your turn. If you can draw line of sight to your opponent's model at any point of its activation with any of your own miniatures, you can declare an ARO. This is a free but limited action that generally allows you to either shoot at your opponent (although generally only allows you one shot rather than the full fire rate of the weapon they have) or dodge out of the line of fire. You can and often will kill enemy units in their own turn, giving more importance to deployment and the placing of troops, making you think on your feet both defensively and offensively, and making every order you spend feel dangerous and exciting.

* The Dice Mechanics: Infinity uses a D20 system for shooting/combat/other mechanics which is based on rolling equal to or under the characteristic being tested, with a roll hitting the exact number of the stat being used counting as a critical success. For example, a line trooper may have a ballistic skill (BS) of 12, meaning that a die roll of 12 or less would be a success. If she rolled a 12, not only would the shot be successful, but her target would not be able to take a saving throw, automatically taking a wound. However, this target number is not static and can change using set positive and negative modifiers to the dice roll depending on how difficult the task is to be completed.

The most common example of this is in shooting where range, cover and equipment have a massive effect on your likelihood to hit the target. So for example, a line trooper shooting his rifle in its optimum range band would gain +3 to his BS (taking it from 12 to 15), if the target was also in cover, he would receive a negative modifier of -3 as his opponent is obscured (taking the 15 back down to 12).

Unlike other games, in Infinity, dice rolls are not 'isolated' based on initiative etc. This means that quite often you will be rolling dice 'against' your opponent to see who is successful. In this case, you would need to roll successfully against the target number of your stat, but higher than your opponent. For example, your line trooper takes a shot against an enemy model. Because he can see you as you activate, he gets to shoot back. The person who wins the roll is the player who scores the highest but is still equal to or lower than their own target number.

Although it may sound complicated, it is actually a very fluid and organic dice system that most players come to terms with very quickly. In gaming terms this is massive, making players think tactically about who needs to take out certain targets, and where is the best place to position a model to stack the odds in their favour. The critical system also means that your line grunt has a small but real chance of firing a magic shot to take out the all conquering death machine chasing him down.

* The Models: Corvus Belli are producing some of the best models in the industry right now, with very few companies coming close to them in quality or design. Do you like giant robot death machines that look menacing and agile? Do you want everyone in your army from the line troopers to your fearless lieutenant to be a work of art? Then you need to play Infinity.

* The Infinity Tournament System (ITS): Unlike a lot of other game systems, Infinity has standardised it's tournament scene meaning that where ever in the world you go, you will always be playing the same game using the same rules in competitive play. You are also given a tournament score and a world ranking by registering for free on the ITS website, which is a welcome and fun addition to the game.

* The Price: A 300pt 'competitive' list for Infinity starts from around £60, with many coming in at less than £100. Starter boxes for the game (which contain around 150pts on average and usually include very useful miniatures for each faction) cost around £30 each and are playable straight from the box (they all have options for legal armies). And have I mentioned that the full rules for the game, the army lists and all the templates, markers and tokens can be downloaded from Infinity's website for free? Also, they have a fantastic free army builder and rules wiki page that is incredibly fast and accurate in its descriptions, meaning that if you don't want to, you don't have to buy expensive rule books. Corvus Belli have also stated publically that his is a practice that they are going to continue with in the future. Inevitably, you will buy the rule books as they are fantastic works of art in their own right and contain lots of fabulous fluff for the game, but it does not have to factor in to your start up costs.

So there you have it.

Infinity is a fast, furious and deadly game with lots of tactical options for players and so much fun to be had. It has a dense but fluid and intuitive rule set that allows for a lot of individuality and thought, a rich background, and models that I would personally rate as being some of the best around.

The question to me at least isn't 'why should you play Infinity', it is 'why are you not?'
I sincerely hope it reaches your tables soon.
Thanks for reading my ramblings, I hope you found them useful.
Ed.
8/19/2014
Natfka
Infinity