Another update from the Hawk Wargames team. We have some new images for the Post Human Republic and some details about them. Here is the latest from the kickstarter.

Update #11 - More PHR renders with weapon options
Posted by Hawk Wargames
This evening we have more renders of PHR cruisers! Backers have also asked for more information on tactics an abilities, and while we aren't releasing rules or specifics we can give an idea of the flavour of some of the ships, showing their versatility and giving an idea of the type of damage output they can deliver.

As with Dropzone Commander, in Dropfleet Commander the PHR tend towards heavier chassis choices, i.e heavier ship classes with more damage output per ship, but with fewer ships in total in a fleet. The faction has a greater percentage of cruisers in their fleets than others, but has fewer options on frigates.

PHR Icarus Class Vanguard Carrier
The models themselves come with variant front arch and broadside plug-ins, each in two parts, which can be best seen on the Perseus Class Cruiser. The front facing weaponry is also mutable, creating a huge range of possible combinations. In Dropfleet Commander we will not be releasing rules for every possible combination that could be made from the Cruiser sprue (which is a huge number of permutations!), as that is not only impractical but will also have a detrimental effect on game balance. What we will provide rules for in the rulebook are the set variant classes that the PHR commonly use, in the same way as we will have ship listings for the other three factions.

The main broadside armaments of the PHR come in three tiers: light, medium and heavy. While we are not releasing the actual names or rules for these yet (although Admiral level backers will have them when we release the Beta rules to them in the new year), we can tell players more about the style of weapons and tactics usable in game.

Light guns (as seen on the Ajax Class) are anything but light in real terms. They are mass drivers that fire at a punishing rate, quickly crippling light and medium ships. In play terms they will have more shots but less power than their bigger brothers, and should be used on lighter targets to obliterate them or if you’re feeling lucky to chip away damage from larger foes.

Medium guns are your all-rounders. Capable of inflicting critical hits and defying a target’s armour, they are less numerous that the light versions but pack a heavier punch. They give a broader range of viable target options, and are helpful for versatility. 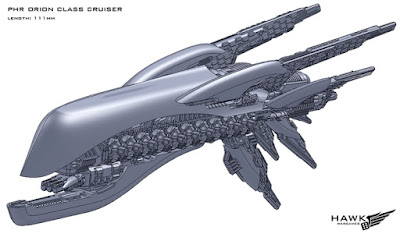 PHR Orion Class Cruiser
Heavy guns are the most in-keeping with the faction, in that the PHR like to hit, and hit hard. They have relatively few shots even compared to the heavier weapons of other races, but when they connect with the target they are devastating. These can blow smaller ships to smithereens, and are very likely to achieve critical hits, punching through enemy armour and immolating huge chunks of deck and superstructure.

The Heavy guns on PHR Cruisers are also posable, similar to their manoeuvring vanes, but on ball and socket connectors. This means modellers can customise the look of their ships as well, creating even more personalisation in fleets. 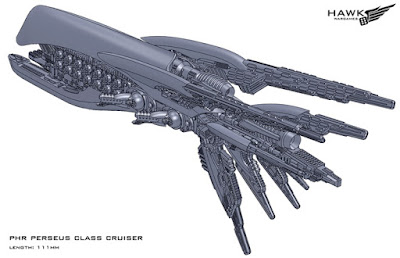 PHR Perseus Class Cruiser
As with all Hawk Wargames games, we aim for balance at all times. While players can take more of one class than others, the game rewards balanced fleet choice, and commanders will find that their forces work best when taking a combined arms approach to list building. With that in mind, the pictured cruiser (and Vanguard Carrier) class weapons loadouts are subject to change, but are shown to give backers an idea of the possibilities.

Tomorrow we will be talking more about the pledge levels as they stand and discussing the privileges of rank; we’ll be talking about the higher pledge levels and clarifying what backers get when they go for them. We will also be in the studio taking pictures of the painted Shaltari models (if you thought the renders were good, these will blow you away) to have those to show in an update later this week/early next week.