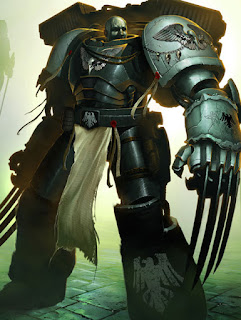 Victorus aut Mortis! We're back with the 4th installment in our Raven Guard review series. On deck: the Bladewing Assault Brotherhood! Be sure to check the Tactics Corner for more great reviews.


Like vengeful angels, the Bladewing Assault Brotherhood descend onto the battlefield to deliver death to the enemies of the Emperor! This formation is comprised of hardened veterans of a chapter backed with elements of the assault companies. They deploy via Thunderhawk insertion and then attack weak points in the enemy lines.
Overview:
This formation gives you access to a large number of assault marines and Vanguard vets with some cool special abilities to boost their mobility that make them stand out from the same units in your standard CAD. If you like jump pack equipped Marines, then you will want to take a look at this formation!
Special Rules: 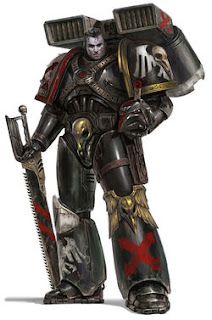 Tactics:
This is a cool formation! I don't think it really competes with the Shadowstrike Kill Team in terms of pure power, but, it does have some very cool tricks up its sleeve! The big trick of the formation is to engage the enemy with a bunch of assault units and then to leap off of the table, leaving the enemy units free to be blasted by the rest of your army. Then, your units come back onto the table next turn with reroll scatters anywhere you want them ready to hit other enemy units. Pretty awesome! This is a subtle ability but if you apply it correctly can really leave your opponent in terrible position.

If you are using this formation in the Talon Strike Force, you also have the option to Deep Strike in on turn 1, which is super cool. Normally, Deep Striking Assault Marines isn't the best idea as it means at best, a turn 3 charge. It also means with a flubbed reserve roll or two, you may not be in melee until turn 5. Had you started on the table, you'd likely have been in combat turn 2. But, if you drop in these units turn 1, you get to assault turn 2, and you have the benefit of seeing where your enemy is before striking. You also get Shrouding turn 1 if you got the top of the turn which helps you survive, and you get to use your Jump Packs in the movement and assault phase due to Raven Guard CTs, which means you can Deep Strike fairly far away from target units, hopefully in safe hiding spaces.

I'd run this formation MSU style, with likely the minimum size: 2 units of 5 Assault Marines and 1 unit of Vanguard, with a Chappy attached. This is a relatively modest points investment but gives you some very useful, flexible tools to work with. You can beef up the units if you choose, and really pepper the opponent with targets, but, considering they all have to Deep Strike along a straight line, that may force you into bad board position.

In all, I dig this formation. It is characterful and works great in the Talon Strike Force. It would also be a fun compliment to a shooty Raven Guard army as it could jump into combat, force enemy units out of cover through consolidation moves, jump off the table and then leave the enemy units in the open with their pants down to get blasted! Sounds very Raven Guardy to me!