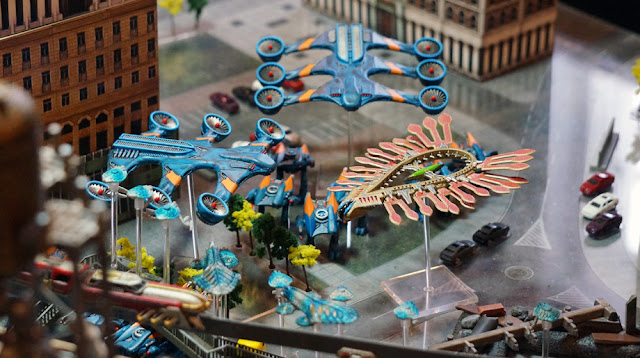 Hello again, Commanders, and welcome back to our ongoing Command School series, touching on the finer points of Dropzone Commander gameplay. If this is the first time you’ve encountered the Command School articles, you might be interested in reading our previous installments:


This week’s entry was inspired by a question I got over in the Hawk Forums:
“Do you always keep squads in battle groups generally grouped together on the battle field? As in do you keep the squads in a battle group in the same area or spread them out? My thinking is that you want battle groups to support each other, so that after the first activation, you other battle group(s) can threaten the squads that are threatening the previously activated squads (who can no longer react), which to me means spreading out a little. Right, wrong or maybe both?”

Answering that question crystallized a few points I’ve wanted to make for a long time about the most important and dynamic part of DZC play – the alternating activation system. Like the theory of battlegroup construction, discussing the alternating activation system can become a bottomless pit of talking points – there are simply too many conditions at work in a battle for there to be an obviously “correct” countermove for any one move.

So, to avoid driving myself (and probably you) crazy, I’ve compartmentalized what I think are the 5 central considerations to make when playing the activation game:

-The rest can be seen at this link.
http://gamerati.com/command-school-part-3-the-activation-game/
11/15/2015
Natfka
Dropzone Commander