We’ve hit £325K, and with this stretch goal achieved we can now unlock plastic space station kits! This kit was a long term plan that we were originally hoping to bring to players in 2017. With the success of the campaign so far, we are able to offer this scenery pack as a bolt-on. The pack was always planned to be five things: a fun part of gameplay, affordable for players, highly detailed, easy to build and modular. Injection moulded plastic allows us to achieve all this, thanks to this Kickstarter.

There will be four large sprues in the pack, featuring a wide variety of parts to create 3 large and 4 small space stations in many hundreds of combinations. These parts can be assembled in a huge variety of shapes, allowing players to make any size of space station they like, from a single massive dock to several small outposts. Because of their modular nature, multiple kits can also be combined to the point where players can make huge orbital complexes! Included in the pack are 3 large and 4 small bases. The total cost of a pack to Kickstarter backers will be £30.

The designs of the parts are currently being finalised, with a range of concept art ready to showcase. Because this scenery pack was not originally planned for the Kickstarter, we are still in the development stage. As Dave is currently completing the PHR, it is very unlikely that we will have renders by the end of the campaign. Seeing how well the campaign was going, we accelerated our timings, and Patrice is now working flat out on concepts in conjunction with Dave to narrow down the look and feel of the final result. 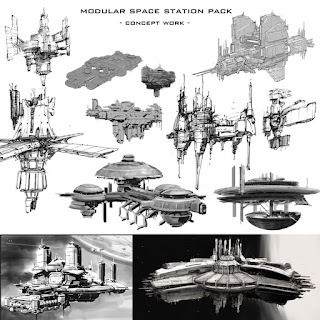 Early Concept work for possible Space Station variants
The final models will vary from the concepts shown. So why are we unlocking this as a stretch goal on Kickstarter, when we won’t have renders? We wanted to offer Kickstarter backers the opportunity to access the scenery pack early as due to the support the campaign has had so far we are now able to make space stations in plastic! As timely delivery is very important to us, we'd like to mention that we do not anticipate that adding this exciting new pack will affect the delivery time. 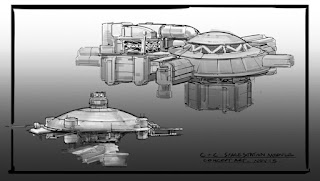 Refined concept work for Space Station Modules
Rules and scenarios for Space Stations will feature in the Rulebook, similar to the scenery packs from Dropzone Commander. These are designed to be fun expansions to the game, but larger stations could also be used in place of clusters in the main game, allowing players to land troops on them and fight for supremacy! We’re really looking forward to using them in-game, and hope to have renders completed in late December/early January at the latest. 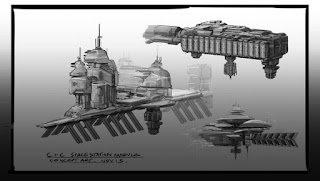 More Module concepts for Space Station pack
Tomorrow we will have more PHR renders to share with you, and painted Shaltari miniatures should be on show towards the end of the week.
Many thanks,