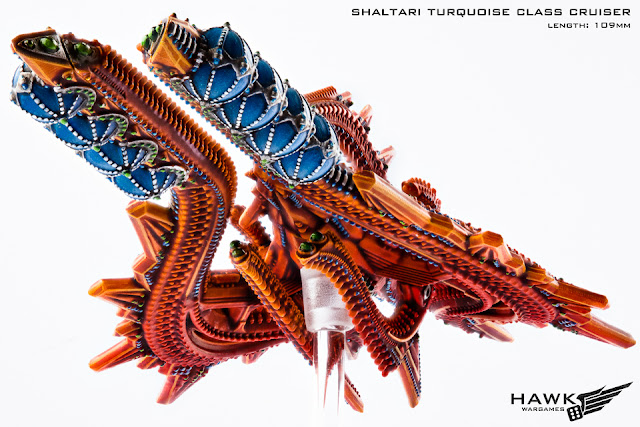 Today the Hawk Team dives into what the Activation cards are, and how they work in the game. Since the Card Pack has been unlocked, this is great news. Here is the latest from the Dropfleet Kickstarter.

Update #20 - The Activation Card Pack
Posted by Hawk Wargames
We’ve unlocked Activation cards, an important extra when moving from starter to larger scale games of Dropfleet Commander. How does this work and are they 100% necessary to the game? Read on…

As with Dropzone Commander, Dropfleet Commander works on an alternate activation method of gameplay. This means that instead of a player doing all their moving, shooting and deployment of ground forces at once, players take turns in activating battlegroups.

Similar to Dropzone Commander, the groups of units which activate together are battlegroups, and created by players when they make their fleet lists before the battle. Each battlegroup will be made up of a collection of ships, determined by the players. By consulting a simple table player will be able to work out the command value of each battlegroup, which become important in playing the game.

The difference in the games comes from who activates first, and when.

In Dropzone commander, players role a die and add their command value. Whoever has the higher total chooses to go first or second, and then players alternate activations until all battlegroups have activated, ending the turn.

In Dropfleet commander there is no dice off for who activates a battlegroup first. Instead, at the start of each turn players issue their fleet manoeuvre orders by way of activation cards. They choose an order that the cards will be flipped over in, and place them face down on the table in a stack. Both players then flip their first card. The cards are numbered, or, in the case of our unlocked cards, have a complete list of what is in the battlegroup on the card.

Players then compare command values of the flipped cards. Whichever battlegroup has the lower command value (i.e. 1 is low, 10 is high) gets to activate that battlegroup first or second (as the player chooses). The other player then activates the battlegroup on the card they have flipped. Once both battlegroups have activated, the players flip again and the process is repeated.

What this means is that the die roll at the start of the turn in Dropzone Commander has become a flip and compare before each battlegroups activates in Dropfleet Commander. In this way players have to work out which battle groups they want to activate in which order at the start of the turn, and also adds an element of reading your opponent to out manoeuvre / out think them and get the drop on the enemy.

To be clear, in basic terms this means:
Players create a stack of battlegroup cards.
They flip a card each, comparing command values to determine the order battlegroup activation.
Once those battlegroups have both activated, players flip again.
When both players have finished their card stacks, the turn ends.
They then decide card order, and create a stack again. 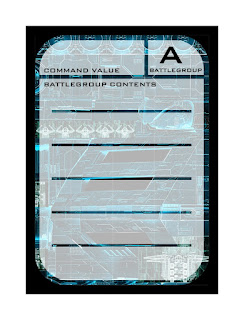 Concept for Activation cards (with Battlegroup A card shown).
The Activation cards are designed to help players with this game mechanic. Players could you anything they like, from a deck of cards to numbered chips, so long as they refer to their fleet list and are all the same on the other side. However we have created these activation cards so that players can add command values and exactly what is in each battlegroup, then flip the cards which have a battlegroup letter on them. They are for ease of use, and can be written on – players who want to re-use them over and over can add clear card sleeves and use a washable marker to make the cards completely mutable.

So how may cards are in the Activation card pack? well:

However there are also 4 labelled Battlegroup G, 2 labelled battlegroup H and two with no battlegroup label. This allows players to expand into even larger games, and also have 2 spare cards to use for whichever battlegroup they would like.

In total this makes 56 cards in one pack.

We hope this has cleared up some information about the Activation Card Pack - as useful aid to playing Dropfleet Commander.