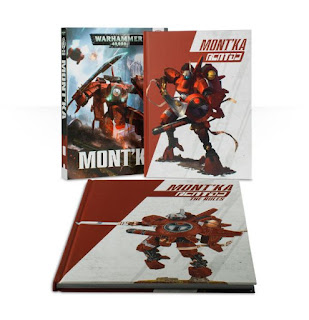 More Mont'ka content, as the missions are revealed from the campaign book.


via Gametrust
We just realized, that we didn't post the campaign missions from War
Zone Damocles: Mont'Ka so far. So we changed that:

There are the first two missions, which put Space Marines against Tau
and Astra Militarum vs. Tau.
http://www.gamestrust.de/news,warhammer-40-000-bilder-kampagnen-missionen-aus-montka,id47460.html

The other six missions can be found in our gallery:
http://www.gamestrust.de/bilder,list1274,1,war-zone-damocles-montka.html


War Zone Damocles: Mont'Ka (Hardback) $74- Pre-Order
http://www.games-workshop.com/en-US/Warzone-Damocles-MontKa-ENG
Description
Following a humbling defeat at the hands of Commander Shadowsun, the forces of the Imperium return to the former hive world of Agrellan, now the Tau Empire’s youngest Sept world of Mu’gulath Bay. Countless regiments of Guardsmen are thrown into the meat grinder as the Imperial commanders vow to reclaim the world from the Tau, and even deadlier assets wait in orbit. Yet while the Imperium may believe it is they who will land the decisive strike, they have reckoned without the return of the exiled Commander Farsight – though considered a renegade by his people, he is the master of Mont’ka, the strategy of the killing blow.

Continuing the narrative left off in War Zone Damocles: Kauyon, this is a truly spectacular chapter in the story of the Tau Empire! Included are two hardback books - a 120-page narrative campaign, and an 88-page rulebook in a hardback slipcase. These books feature a host of content and updates:

An essential purchase for all Tau Empire and Astra Militarum players!