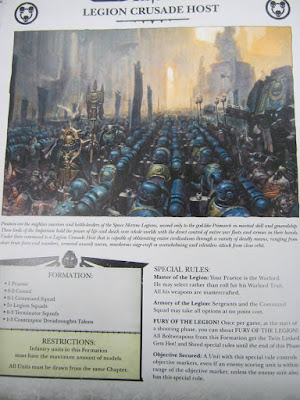 Are these new, or have they been up for a bit? GW Halle on Facebook posted this up. It's interesting, and I will just the image here. I've been out of the loop for most of the weekend, and I am sure a reader here can place. it.  (Updates on the origin of this is below)

The German Translation via Google
Tomorrow it is time to choose a side. Horus or the emperor? The truth of the chaos or the imperial truth?
To whom will you are, if the galaxy is on fire....

Updated
You guys are awesome. Here is what this is, and what it is meant for.

Hey there,
the Legio Crusade host formation is a special formation for an event
called "Fury of the Legion". The idea is that buyers of the HH box will
choose a Legion and play as them in a campagne.
This could either be a campagne using the rules from the HH box, or
using the Forgeworld books and the formation is to motivate people
getting that second box to fill the slots or combine their legion armies.
This is an event were stores can participate, but don't have to.

another thing:
people in the comments seem to think that you need 100 space marines to fill the 5+ legion squads.
It just states that you need a "legion squad" at full size.
this can be any squad, either tacticals, supports, despoiler, recon, whatever as long as its troops selection.

So no need to field 100 tacticals with 100 bolters

Update Number 2
via a source that wishes to remain anonymous.
It was made by some store managers to promote the release and use the miniatures with 40k rules as there is no possibilty for them to get the Forgeworld rules in stores.
11/09/2015
Natfka
New Releases, News Headlines