The Betrayal of Calth is now up for pre-orders in some parts of the world, and soon to be everywhere. Games Workshop expanded upon their teaser video to include more images of the game as well. Take a look at this week's pre-orders. 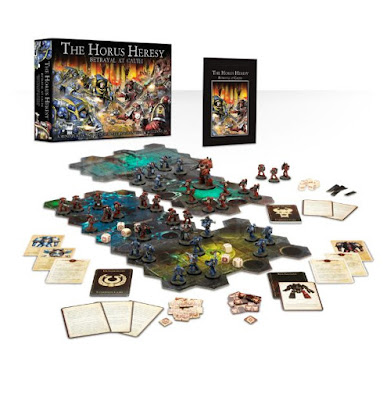 
Description
It is the 31st Millennium. The galaxy is aflame.

Enlightenment and knowledge are sundered; the Age of Darkness has begun in earnest. The Emperor’s glorious vision for humanity lies in ruins as his favoured son, Horus, has rejected his father’s light and embraced the corrupting tendrils of Chaos. Civil war has broken out amongst the Space Marines - once brothers, fighting side by side as the galaxy’s protectors, they are now a force divided. Some remain loyal to the Emperor, others have sided with the Warmaster. Nothing is certain, everything is at stake, and the Imperium is split down the middle…

The Horus Heresy: Betrayal At Calth is a fantastic standalone boxed game of claustrophobic tunnel combat, set during the Word Bearers’ invasion of the Ultramarine world of Calth. Emphasising fast-paced squad-based combat during six exciting missions, it allows players to choose their side and command a force of beautifully detailed Citadel miniatures in a brutal war for survival, during one of the iconic battles of the Horus Heresy.

Inside the box, you’ll find:

An impressive selection of detailed Citadel miniatures, including;
- A Captain in Terminator Armour and a Dark Apostle;
- A Contemptor Dreadnought, armed with a choice of multi-melta or twin assault cannon;
- Five Cataphractii Terminators, with weapon options including combi bolters, power fists, lightning claws, chain fists, power swords, heavy flamers and grenade harnesses;
- Thirty Legion Tactical Space Marines in MK4 armour, with a huge selection of weapons and custom features, including bolters, missile launchers, heavy bolters, chainswords, power swords, power fists, plasma pistols, lightning claw blades, combi flamer, melta and plasma guns, a melta bomb and a set of combat blades! These miniatures also include ammo packs, holstered bolt pistols and a selection of frag and krak grenades.
- Four double-sided boards, beautifully printed on thick card stock, representing the caverns under Calth where the desperate struggle between the Ultramarines and Word Bearers took place;
- A forty-eight page book, featuring an introduction to the battle on Calth, comprehensive rules and scenarios for playing the game, an overview of the Word Bearers and Ultramarines legions and a showcase of the included miniatures;
- Forty-two command and reference cards, used to introduce effects and events into the game;
- Twelve dice and an array of markers used in-game.

The included miniatures can be painted to represent any Space Marine chapter with any weapon combination you like - you’re not bound by the game at all! This is truly an exciting box game - get involved in the cataclysmic events that almost destroyed the Imperium and set the galaxy on its course of decay.
11/07/2015
Natfka
40k, 7th Edition, Horus Heresy, New Releases, News Headlines