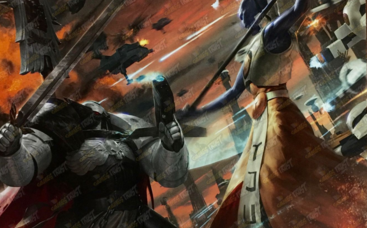 It's always good to take note of consistencies for releases. Sometimes things feel very random and all over the place, so its good to have some ideas of what happens with these campaign.


So yes, I am sure many people already have this figured out, but there are also those of us that need to see it. Thanks for sending in. I don't recall if I had permission to use your name... shoot me a quick email and I will update it if you don't mind.

via a reader here on Faeit 212
…that the next/final Damocles Campaign book will feature Shas’O Shovah (Commander Farsight) and be called Mont’ka.  Not a leak or anything, but…:


O’Shaserra (Commander Shadowsun) and O’Shovah (Commander Farsight) are both pupils of the exemplary old Tau Commander, Puretide.  Shadowsun eventually specialized in the Puretide’s Kauyon (The Patient Hunter – bait & ambush) method of warfare while Farsight drove in the opposite direction, specializing in the Mont’ka (The Killing Blow – rapid overwhelming assault at a weak point), the two ideologies totally at odds with each other.  In the backstory, Farsight exiles himself and his followers in Enclaves on the far side of the Damocles Gulf (for reasons that are expanded upon in the new codex), away from the control of the Ethereals.  Needless to say, O’Shovah and O’Shaserra are not friends (barely comrades, only united by race) but they are both active on each side of the Damocles Gulf, galactically west of Imperial forces.

Looking at the recent 40k campaign supplements since 6th they follow a pattern:


So logically the next book will be the counterpart to the first; Mont’ka, will be a hardback and the concluding part of that campaign from another perspective, undoubtedly Farsight’s.

The new 7E Tau codex has Shadowsun as an option for the Hunter Contingent Detachment’s Command Formation but Farsight is not included in it anywhere.  At all.  He is just an HQ datasheet.  The only way to take Commander Farsight is to field a CAD with him as a HQ choice.  This prompts me to believe that this is a definite deign decision to allow for a Mont’ka campaign supplement which will provide new rules and Formations for Farsight and his forces, most likely replacing the old Farsight Enclaves book.

As I said Natfka, not a leak at all but I keep an eye on GW’s releases and I’ve fielded a Tau force for quite a few years.  :]

Updated from Anonymous sources
Might be worth mentioning since you talked about the pattern of campaign
books that this series is covering Damocles, the Apocalypse war zone books
are being discontinued and these 40k books seem to be replacing them. If
people are interested in the Apoc books they should pick them up as they
won't be replaced once gone and probably won't be updated. Don't know if
this has been mentioned.
11/09/2015
Natfka
40k, 7th Edition, News Headlines