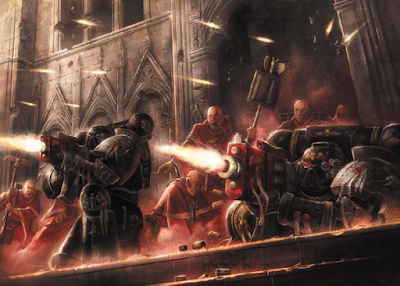 Rumors of a Deathwatch game coming are taking more shape now with additional rumors of a stand alone box game that pits the Deathwatch up against a Genecult. The rumors today came from anonymous sources on Bols, but when coupled with past bits, and an additional snippet of information left on Faeit 212, it seems like this could be on the horizon.


I would be up for a game like this if it comes around.

via Larry Vela on Bols
A source who spoke to BoLS on condition of anonymity, says:
Opposition force for the Deathwatch in the Boardgame is Tyranids.
Look for Genestealers, Warriors, Lictors.
There is a “box only” Lictor Character.
As with Betrayal at Calth – these are standard 40K models fully usable outside the boardgame.
There is chatter of potential Deathwatch op-for xenos expansions for the boardgame (Orks, etc…)

Previous info as listed on Bols
Look for the Deathwatch to arrive in the Grimdark in 2016.
They will make their initial appearance in a boxed boardgame like Execution Force / Betrayal at Calth.
The Deathwatch models are based around a new Deathwatch upgrade sprue.
The sprue will contain items such the distinctive shoulderpads, and specialist equipment and weapons of the Deathwatch.
The Deathwatch sprue will be bundled atop the Sternguard base kit in the boardgame.
The game will allow for you to equip your Killteam’s weapons and equipment in a variety of ways with rules to support them all.
As with Betrayal at Calth – these are standard 40K models fully usable outside the boardgame.
There will be an opposing force the Deathwatch is pitted against with their own models in the box.


On Faeit 212
Squiggly has been leaving behind small snippets of information for a few months, buried in the comment section. This one came up when a Bols source chimed in declaring tyranids and Astra Militarum were coming in jan/feb.

via Squiggly in the Comment Section on Faeit 212 a few weeks ago.
Jan is AoS, no 40k til Feb 2016. The only Tyranid release of the near future is the Deathwatch vs GC game which will be released Q1 2016.