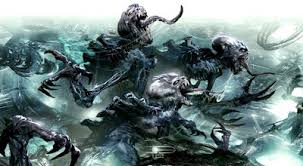 These rumors point to a new campaign coming after the start of the new year featuring none other than the Astra Militarum vs Tyranids. A classic battle in any sense for the 40k universe, something like this would be a lot of fun to see.

via Larry Vela from a source who spoke to BoLS on condition of anonymity
http://www.belloflostsouls.net/2015/11/40k-rumors-astra-militarum-beyond.html
The Tyranid release window in January will include a Kauyon-style campaign book their fight versus the Astra Militarum

Astra Militarum will be the followup 40K release window.

Look for a more full bodied codex upgrade for the Astra Militarum than the Tau received.

Several aging kits will be redone, exact numbers and which are unknown at this time.

Baneblades and all variants are in the codex as Lords of War.

Baneblade squadrons have been mentioned.

Look for all of this in Feburuary, before a brief return to Age of Sigmar the the real launch of 30K towards the end of Q1-16.
11/18/2015
Natfka
40k, 7th Edition, Astra Militarum, Imperial Guard, News Headlines, Rumors, Tyranids