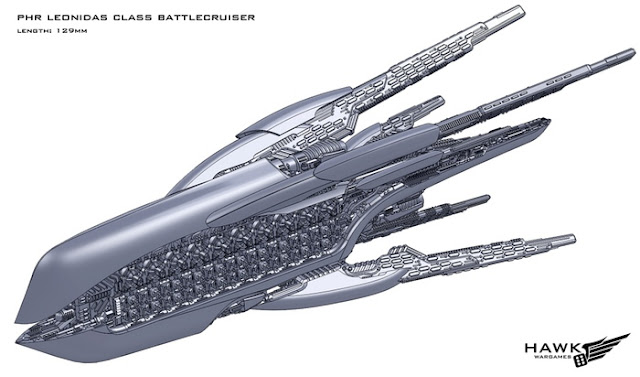 Those are some nice looking ships. Now all 4 cruisers can be seen for the factions and we can get a good look at them up next to each other. 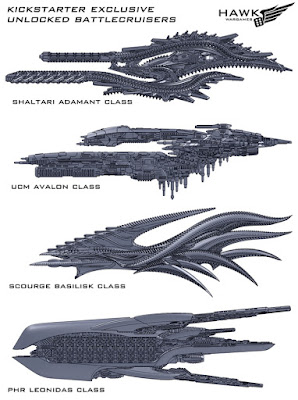 Update #22 - Battlecruisers to increase your fleet's firepower
Posted by Hawk Wargames
Today’s update is all about firepower – torrents of explosive, burning death unleashed at lethal speed toward the enemy fleet. And what better way to bring overwhelming force to bear than with one of the four unlocked Battlecruisers!

Battlecruisers in all their glory
Battlecruisers in all their glory
As we have hinted and many backers have guessed, there are in fact four Battlecruisers to choose from – one for each race, including one for the UCM. They are all Kickstarter exclusive, and while we originally thought of only having three (Shaltari, PHR and Scourge) we have listened to the community and are offering a new UCM ship as well, so that backers who are unable to get the UCMF Atlantis can still get a kickstarter exclusive ship in this class.

How will pledge levels relate to the Battlecruisers? Well, backers can add them in the same way as previous bolt ons for £14 per ship. This allows any backer of any pledge level to add more if they would like (which is understandable given that these models will only ever be available via kickstarter!), however Admiral and Commodore backers are slightly different:

As previously stated (but for clarity):

Commodore backers receive:
1x UCMF Atlantis + 3x any combination of the other four battlecruiser (e.g. 3 UCM OR 2 Scourge and 1 Shaltari OR 2 PHR and 1 UCM etc).

Because of the now added extra UCM battlecruiser, backers who would like the Atlantis AND all four other Battlecruiser will have to bolt on the fourth Battlecruiser.


Admiral backers receive: 1x UCMF Atlantis AND 1x each of the other Battlecruisers.

Again, if they would like even more of any of the Battlecruisers (apart from the Atlantis, which is only ever 1 per backer at high pledge levels) they need to bolt this on.

Now the technical information’s out the way, here’s a little more about the ships and the class itself.

Battlecruisers are - and have been since their inception – top heavy. They we designed to be able to maximise the speed and manoeuvrability while able to carry guns and payload a step above their weight class. In this respect they offer almost as much firepower as a battleship, on a much faster ship.

However this is where the top-heavy element comes in; they can dish out punishment, but need to be wary of sustaining it. A Battlecruisers' superstructure is only slightly more durable than a standard cruiser, which makes them almost as susceptible to enemy fire. While they are close to matching Battleships in firepower – and can certainly out-manoeuvre them – the odds are stacked against them in a protracted exchange of fire.

As with all elements of Dropfleet commander, this is where a player’s tactical acumen and planning come into play. To be used best, Battlecruisers have to apply their speed and force in more strategic ways – picking your battles for the best outcome, rather than slamming head on into the enemy’s larger ships and formations. However in the right hands the sheer firepower on tap from a fast hull will favour the aggressive, bold player when pouncing on lesser foes.

Battlecruisers also make excellent choices for flagships, especially in smaller games. They cost fewer points than full battleships and can keep up with the rest of the fleet, allowing a more varied and flexible fleet when the need arises. 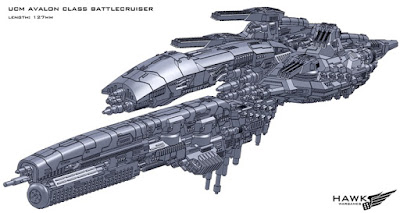 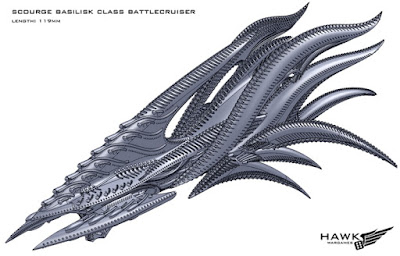 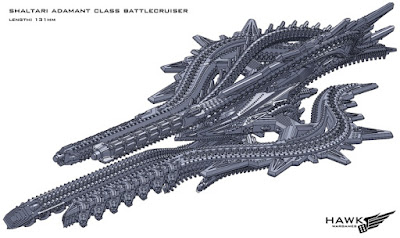 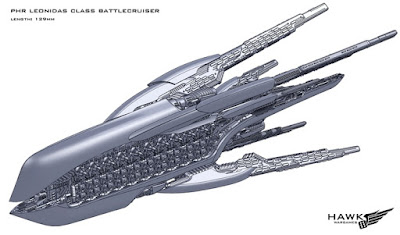 Each has a devastating array of weaponry that we’ll be talking about in more detail at a later date, but eagle eyed backers will be able to see from the scale of weaponry just how potent these vessels are on the tabletop. As with the Atlantis, these Battlecruisers are kickstarter exclusive but can be used as proxy models for a standard battlecruiser – and, because we’ve had questions about this before, they do all come with their appropriate bases!