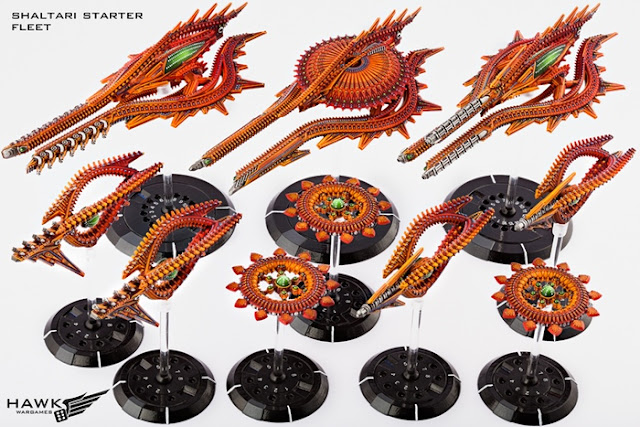 Today Hawk Wargames is updating us with the first painted Shaltari ships revealed on the kickstarter. I really like how these ships are turning out, especially the Emerald Class Mothership.

There are only 17 days left in this kickstarter. 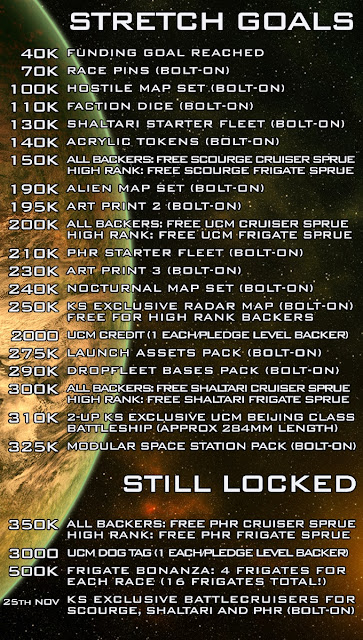 Update #15 - First Shaltari Painted Pictures
Today we have images of the Shaltari fleet, and as promised they are vibrant, sleek and deadly. 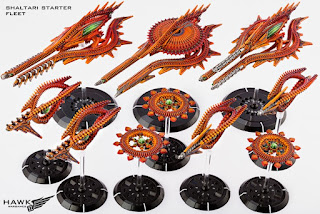 Shaltari Starter Fleet
Similar to the other factions, weapons on Shaltari are plug-ins. With cruisers and heavy cruisers these are on the forward struts, making bi- or tri-barrelled weapons arrays of varying esoteric and devastating energy weapons. With the frigates the front sections of the ships alter, creating very different silhouettes for each weapon system. 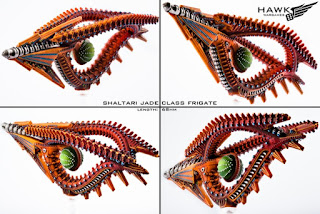 Jade Class Frigate
Current loadouts include those shown (though as ever the final rules and combinations may vary), but we thought we’d focus on a few to give you a flavour of the race.

Turquoise Class Cruiser
The Turquoise Class cruiser has powerful if unusual orbital bombardment weapons. These work to destabilise a localised area of a planet with horrifying efficiency. A highly advanced combination of gravimetric distortion and weather alteration projectors hammer the target with lightening, ion pulses and localised tectonic disturbances that fed into each other to create vortices of destruction a few miles wide. Yet the high technology of the Shaltari keep the destruction contained enough to not hamper ground operations in other parts of a cluster. 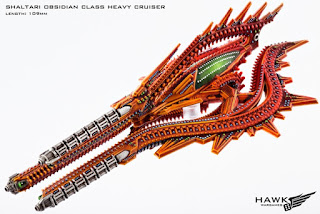 Obsidian Class Heavy Cruiser
The Obsidian Class Heavy Cruiser is a full frontal damage dealer. It sports three huge Particle Lances, which to the laymen are the equivalent of UCM burnthrough lasers. They are, however, much direct in effect. Simply put, they destroy armour, shields, composites and hardened bulwarks with ease. Such is their power that there is no know way of stopping the damage, and any hit will create a hole in the side of a ship the size of a main battle tank. Thankfully for enemies of the Shaltari, the arc of fire on such weapons is necessarily tight, requiring clever manoeuvring from the Obsidian’s captain to cause maximum damage. 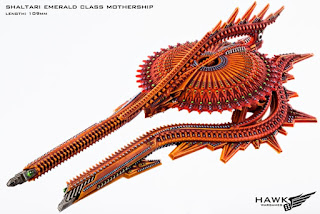 Emerald Class Mothership
The Emerald Class Mothership is the lynchpin of Shaltari troop deployment for orbital insertion. In concert with a series of Void Gates, they utilise Shaltari teleportation technology to deploy troops to any area of the battlefield. The Emerald Class is the transport for ground troops, with the Void Gates acting as nodes for teleportation. While in close proximity to the Mothership they can be used in atmosphere to swiftly move forces into controlling positions or extract them from dangerous areas. Even if they mothership is destroyed the Void Gates can still manoeuvre troops, however their utility is greatly diminished. 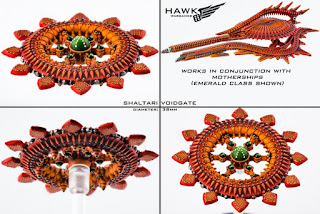 Emerald Class Mothership and Void Gates
We will be posting more pictures of several more variant ships on the main campaign page soon, as well as posting more information about unlocks this week.