This morning the new AoS Scenery set is up for pre-orders and comes with the board and several scenery sets (and is already temporarily out of stock in the UK). Also up for pre-orders are a couple bundle deals for 40k that are formations in the War Zone Damocles: Mont’ka.

There are also a lot of paint bundles and more. 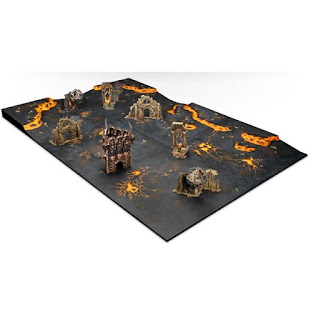 Warhammer Age of Sigmar Scenery Set
The perfect way to get yourself an instant, impressive collection of scenery for your games of Warhammer Age of Sigmar, this bundle is full of high-quality plastic Citadel miniatures! You’ll receive a set of Baleful Realmgates - unstable portals that can be used to traverse the Mortal Realms by those brave enough to risk the terrors within; two Ophidian Archways - ancient relics of times barely remembered, covered in serpentine carvings that seem to writhe as if given sinister life; two Numinous Occulums - places of unimaginable power, whose wildly spinning wheels connect the magic of the Realms in strands of pulsating sorcery; and a Realm of Battle Gameboard - a set of six rigid plastic board sections that allow you to build a 6’x4’ gaming table in three distinct configurations.

The scenery pieces are designed with full modularity in mind; configure them easily in any way you see fit, and build a monstrous site of arcane might and power! 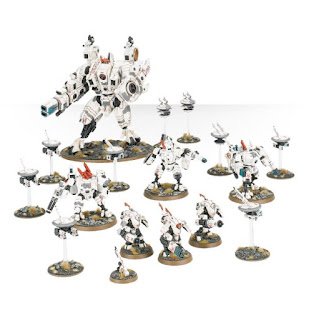 Rapid Insertion Force
Known and rightly feared as the primary weapon of the Mont’ka, the Rapid Insertion Force infiltrates the battlefield with surprising grace, selecting critical targets and triggering homing beacons. Moments later, Crisis Teams airdrop in, using their jet packs to zone in on the painted co-ordinates. Marker lights from the soaring aerial fleet light up the targets below even as the weapons of the XV8 Crisis Battlesuits blaze away in unison - and the assigned XV104 Riptide Battlesuit adds an extra element of incredible firepower to the mix. This, then, is the killing blow.

This bundle contains everything necessary to field the Rapid Insertion Force, a Tau Empire formation found in War Zone Damocles: Mont’ka. You’ll receive an XV25 Stealth Team (three Battlesuits and a markerlight Drone), three XV8 Crisis Battlesuit Teams (nine Battlesuits and six accompanying Drones), and an imposing XV104 Riptide Battlesuit with two Drones of its own. Twenty-two examples of the might of the Greater Good! 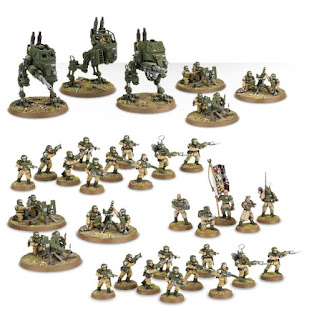 Emperor’s Shield Infantry Platoon
Pushing ever forward, led by the watchful eyes of a reconnaissance Sentinel, the soldiers of the Emperor’s Shield Infantry Platoon are as relentless as they are determined. Laying down a constant hail of withering fire as they move, this platoon scythes down rank upon rank of enemies - few targets can withstand the brunt of their assault for long.