The Secret Messages are Done, but Glottkin is Here 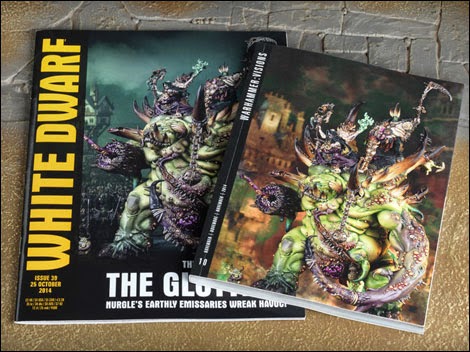 The covers of both Warhammer Visions and White Dwarf this week feature Glottkin. While we have seen a lot of the new information from Thorin (we all thank you for the preview information), summoning daemons, combined armies into the Legions of Chaos, and Heroes Returning are all real with this coming release.


The image above comes to us early from What's New Today (GW), and our week long secret messages from there have wrapped up. (none on today's post).
Here is a link to the What's New Today blog post from GW, where you can read more on what is coming.
http://www.games-workshop.com/en-US/blog/blog.


Inside you’ll find a massive Iron Hands collection painted by Promitheas Spyridis. This is just a tiny part of his army.
This issue also includes a gallery of personal miniatures painted by members of the ’Eavy Metal team and the Citadel Studio.
There are 50 pages of Golden Demon entries from Games Day UK 2013 in this issue, including this macabre Court of the Archon by Chris Blair.
Blanchitsu this month has a very Nurgly feel to it, featuring a seriously twisted warband of Chaos.


Here is a report of someone that just received their White Dwarf a little early.

via librerian_samae
Just got the latest white dwarf, 'chaos legion' list in glotkin end times confirmed.
Also new profiles for karl franz (the ascended) and several others one possibly being louen leoncoeur from the sound of it.

The battle rep was rather fun, the chaos forces play whack a vamp with vlad as he got killed straight off the bat first by the fighty glotkinn then by the blightking champ as soon as he reappeared using the ring. Speaking of which that blightking champ managed to kill every empire character he came across, as the rest of his 15 strong unit just tanked all the damage everything they fought through at them!