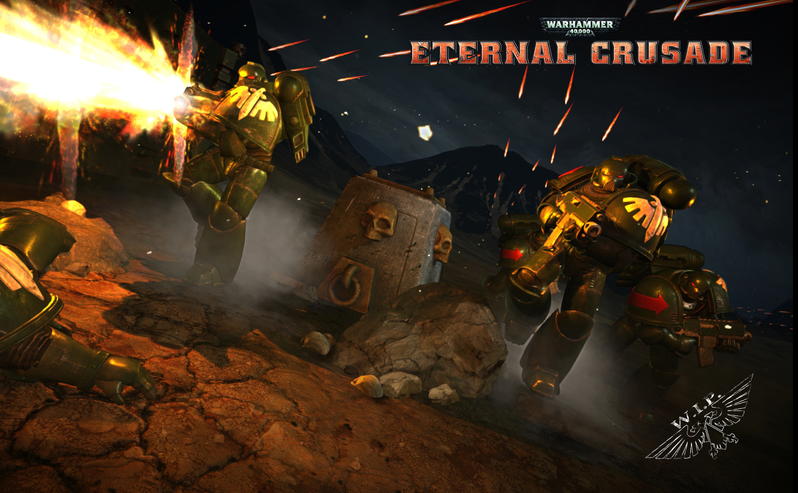 I had the chance to sit down with Miguel Caron and talk shop for a bit yesterday, and there has been a lot of developments for the game Eternal Crusade. Exciting information including a change to the first early access module from a basic tutorial "Boot Camp" to learn the basics of movement and shooting, to a full 10vs10 shoot out mini-game.


First Early Access Module
For those not sure of what this is.... Its for the Founders Program (early purchasing of the game). This gives you a first hand look at the game, from a more polished look inside a 10vs10 Space Marine vs Chaos Space Marine mini game. For me this is a an exciting change, from just being able to move around, to actually stepping into the game and battle each other months before game release.

While the details are not done yet, as to the weapons, armor etc that you will be getting, the official release date for this is Q1 of 2015. That places it somewhere between January and March.

Business Model.
Another thing we talked a lot about was the development's transparency. Getting into the details of how the game is being released and revealed from its early stages of development all the way through to a final polished release. While there are some who do not like this "seeing the early development with not-final graphics", I think this is an excellent way for the community to become involved and get in early comments on the direction of the game.

Already there has been changes made to the game based solely upon community involvement, from the cost of items in the Rogue Trader Store (down significantly), to no items in the game being "pay to get items only". This means that all weapons and items are able to be purchased from game play, instead of being limited to only using real world money. The idea of "Rare" items comes directly from Games Workshop to the design team for Eternal Crusade, simply because of limitations placed on them "only 5% of players can have access to Horus Heresy relics".

Storyline with Graham McNeill
Graham McNeill is directly involved in the storyline of this game, including already writing 6-7 short stories for the game. In the video below, he discusses the storyline, and the possibilities of the story of Arkhona in future works. One of the things discussed, is the narrative played out in Arkhona fully becoming a full fledged McNeil novel down the road. (around 27 minutes).

If you want to watch this directly for yourself, with Graham McNeill joining the Behaviour Interactive team, check out the following video at about 1:38.

Also in the livestream, the Apothecary model is revealed, and how he will function in game.

Graham McNeill is deeply involved on the storyline and events that will play out in Eternal Crusade, and the latest contest is just the icing on the cake. You have the chance to immortalize your artwork with for his latest short story, Death on the Maiden World.

Submissions must be uploaded via the “Enter Now” link on the contest page no later than November 25, 2014 at 11:59pm EDT. All submissions must include a description of the entry, and where it relates to from Graham McNeill’s story. Non-digital creations will need to be photographed. Accepted file formats include: .jpg, .png, .pdf and must be no greater than 2mb.

The length of the judging process will depend on the number of entries received. Winners will be announced on the contest page and contacted via e-mail. 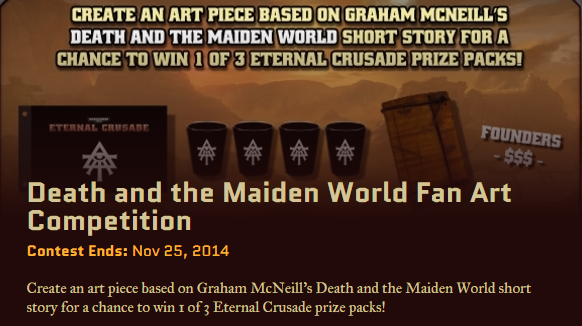