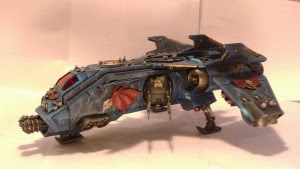 Hey everyone, it's Adam from TheDiceAbide again, back for more punishment.  Hot on the tail of my Heretics and Renegades First Impressions, it's now time to properly read through the book and talk about the specific vehicles that jumped out to me and why.  I'll probably do a more in-depth review at some point in the future to go over them all individually, but for now, here are my favorites.

I think putting the Sicaran at the top of the list is a safe place for it.  Chaos has for a long time struggled with skimmers, especially now that Dark Eldar also get those lovely 3+ jinks... Well fear no more!  A reasonably cost fast vehicle with armour that will make a Wave Serpent cry, and a main armament dishing out 6 twin-linked rending autocannon shots a turn that ignore jink.  This can even serve as anti-air in a pinch.  I'm sure that we'll see these fairly often in Chaos armies, though it will require a Warpsmith, Abaddon or Sorcerer with Maleficic to take more than one (as an Infernal Relic).

I loved the Hell Blade before, now it's even better.  It's down 15 points, but for coincidentally a 15 point fee, you can upgrade both of it's Reaper autocannon to heavy 3 and rending.  It also has a nifty rule where it can move D6+2" in any direction before it moves (but maintaining the same facing), which can be used to move backward so that you can turn earlier and shoot something that you flew past.  They're lightly armored, but are strong competition with the Space Marine Storm Talon now.  Definitely worth considering as a cheap source of anti-air, that can even put the hurt on most land-based vehicles.

The big daddy gunship, they were experimental before and are now finalized in all their glory.  They compete for Heavy Support choices, but they bring a nasty punch with a twin-linked avenger bolt cannon, plus two Reaper autocannon batteries (heavy 4, twin-linked), and it's useless Hellstrike missile can be upgraded to far more handy Balefire incendiary missiles (S5 large blasts that ignore cover).

This guy has been called all sorts of dirty names by the community at large, who seem to have wanted a carbon copy drop pod (boo-hiss).  I really think that there is a lot to be explored with the Dreadclaw though.  It doesn't have internal guidance, but since it lands in hover mode, it can flat out 18" after landing, meaning you can deep strike to a spot you find safe, then zoom over to where you wanted to be.  Additionally, you're not forced to disembark, so after you zoom to the spot you want to be in, you can relax in the relative safety of your AV12 HP3 bunker.  If you get shot down, you're not a zooming flyer, it's no different than being in any other skimmer, so you'll usually be unharmed.  If you want to play it risky, you can deep strike closer to the enemy then deal a S6 hit to every enemy model within D3+3", though personally, I probably wont do that.  Like the Space Marine drop pod, it's objective secured when taken for a Chaos Space Marine squad, but unlike the Drop Pod, it can move around capturing objectives, not just the one you dropped near.  Finally, it's an assault vehicle, so if you get shot down or not, you can still charge the following turn.  Sure, it costs 3x as much as a Space Marine drop pod, but that's because it's actually capable of far more.
10/24/2014
Unknown
Forgeworld, How we play the game., New Releases