Leaked Glottkin Image, Release Information, and Hints for Next Week! 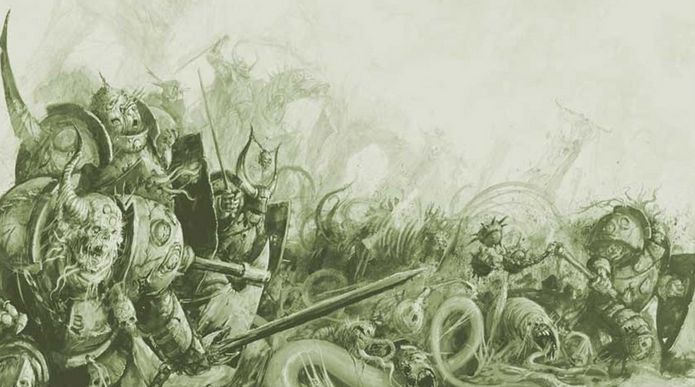 The rules for Glottkin are apparently not in this week's White Dwarf, but we are now seeing another leaked image of the beast. He is a little smaller than I had first thought, but considerably larger than the Maggot Lords.

Next week though...... a hint mentioning respirators. Looks like a return to 40k.


Please remember that information must still be considered rumors, and that there is still room for error on information, even though it matches up exactly with what we had posted up here on Faeit 212 yesterday.

via Arthurius11, who found the image on Twitter and posted it on Warseer
http://www.warseer.com/forums/showthread.php?401269-Chaos-Endtimes-Mk-II/page15
http://i.imgur.com/XAd2kKz.jpg


via MajorWesJanson
Got a quick look at the new WD. 40K player, so not really an expert on fantasy.

Glotkin is indeed 2 books in a slipcase, like Nagash. Looked a tad thinner, like both books were about the same thickness. IIRC Nagash the fluff book is a lot thicker than the rules book.

Pair of characters ride it, one combat that looks like the armored guy with the half horn head from the maggot beasts, the other is a more ragged looking caster type. Both named Glott. Model is on a much larger base than the maggotlords, probably the 150 by 100. Top of beast part of glottkin is about level with the top of the magot lord riders head, with riders and some horns makin it even taller. Not stompa sized, but I'd say somewhere between the orkanaut and imperial knight. My favorite part is the little nurgling on the base that looks like a mini-glottkin mount, with 1 squggly arm and 1 spike arm.

No rules for glottkin included (likely because the book is released at the same time) but a battle report on fall of altdorf on a big table.

Coming next week mentions respirators, so no clue what that is about. Spent most my time looking at the 2 nice new 40K bundles.

I really should have remembered the coming soon section, but I looked it at, saw nothing interesting (to me) and moved on to the nice pictures.
My very shoddy recollection:
Assembling Chaos Legions
Codex Apocrypha
Check your Respirators

That is not verbatim, just what sounds right to my head. Someone with more access to the book can probably correct and/or confirm.
10/22/2014
Natfka
40k, Leaked Images, New Releases, News Headlines, Rumors, The End Times