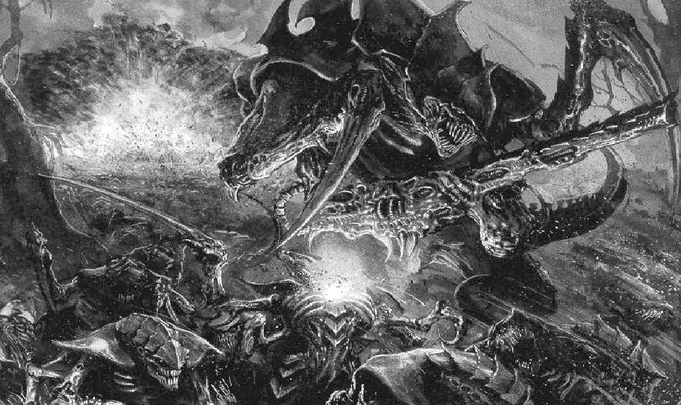 We were talking about the new Tyranid box set, and I promised a few more details from sources. So lets take a look at the two new monstrous creatures for Tyranids, the Toxicrene and Maleceptor.

Please remember that these are early rumors, even though I am sure that leaks will arrive sometime this week to show that these are indeed coming. I look forward to seeing the models.

Of all the recent releases, I find the design of the rules for choking cloud to be fantastic. A cloud of poison that effects open topped vehicles and those that have lost a hull point with armour bane is truly a nice rule. Not to mention that it gains instant death on a roll of a 6. Very deadly, and very sweet rules. Almost makes me want to start a second Tyranid army. It makes me want to hit a vehicle with psychic overload, and then blast it with a choking cloud.

I have added information to the previous bits, just to keep it cohesive. New info is in italics.

Once again, the releases for this week if you are just catching up on the news
Tyranid Toxicrene/Maleceptor 1 miniature $73
Warhammer 40k: The Rules small format hardback $58
Tyranid Dice Tin 10 dice $17

via an anonymous source on Faeit 212*****
Toxicrene
Heavy Support, slight over 150pts
Acid blood, Lash whips, fearless, Instinctive behavior feed
On a large oval base with 10 long tentacles and a face like a lictor.
A 5 wound t6 monstrous creature who is hypertoxic and shrouded. this means any hit gains instant death on a wound roll of a 6 due to a toxic cloud. This includes its close combat attacks and its choking cloud

Maleceptor
Elite Choice: Monstrous Creature, slightly over 200pts
A 4 legged beast with two large scything talons
A psyker level 2, synapse monstrous creature that has an invul save of 5+. It has shadows of the warp and a 4+ save.

Psychic Overload: Warp Charge 2
It has the psychic power psychic overload, which is a 24" focused witchfire. target must take a leadership test on 3d6 and vehicles count as leadership 10, failure causes d3 wounds no armor or cover saves allowed, and a causes a single glancing hit to vehicles, no cover save allowed. The maleceptor can do psychic overload three times a round, but cannot target the same model twice.
10/27/2014
Natfka
40k, 7th Edition, New Releases, News Headlines, Tyranids, Warhammer 40k