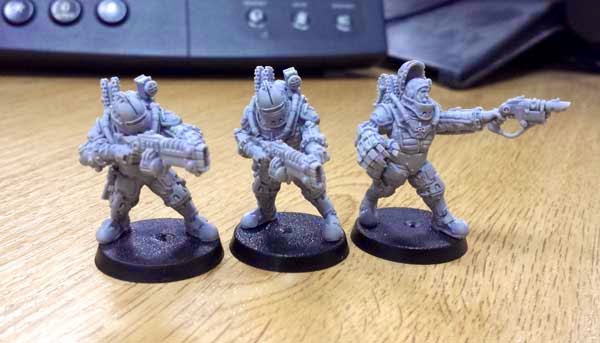 I am sure many Astra Militarum players have been watching the Solar Auxilia releases from Forgeworld with interest, I know I have. Of course they are for the Horus Heresy, but they are such cool models, that I am temped to start collecting them over my Cadians for standard 40k games.

Yesterday morning Forgeworld revealed even more upcoming models that will be coming. Just check out the pic above, and what was revealed on the last Bulletin.

You may have seen something of the new army Forge World has just launched – the Solar Auxilia. The Lasrifle Section, Dracosan Armoured Transport and Tank Crew are all up for pre-order now, and there’s loads more to come! I managed to get hold of a few of the fantastic models from the upcoming Solar Auxilia Veletaris Storm Section – volkite charger-toting veterans clad in reinforced armour. Take a look…
http://www.forgeworld.co.uk/News/FORGE_WORLD_BULLETIN_38.html
10/27/2014
Natfka
7th Edition, Forgeworld, Horus Heresy, New Releases, News Headlines