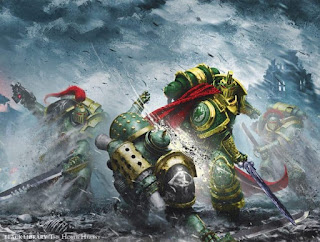 A new version of the Horus Heresy is coming according to this rumor. The Horus Heresy getting a reboot would be fantastic and allow for it to be expanded upon.

There are two parts to this although the first is not really a rumor, just a lead-in setting the stage.

Again for those new here (apparently quite a few of you.... Welcome to the site👍) please take all rumors with a pinch of salt. I do feel this is a solid rumor due to the way it was brought to me this morning.

A little while ago Anuj left Forgeworld where it appears he worked on the Horus Heresy. I beleive he now works for Creative Assembly.

This is what he announced when he left.

He in no way mentions any rumors, but with "Great Things coming" it rather suggests that perhaps something big is coming that he may have worked on, or knew was coming from his area (Forgeworld). Anuj made his announcement of leaving Games Workshop in December of 2020.

So this is the rumor. Sent in from anonymous sources but was up on Bolter and Chainsword as shown below.