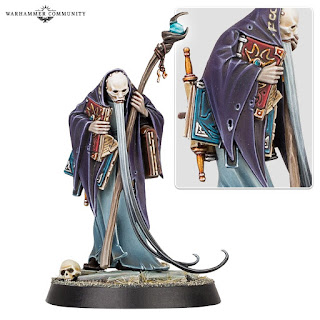 Octren spent many decades delving into the mysteries of the Realm of Death. Along with Torgillius, he experimented with grave-sand, seeking the secrets of immortality. But the now-chamberlain stole his research and fled to Ulfenkarn. To rub salt into Octren’s wounds, his former friend then perfected their work. You might not be able to see it behind his death mask, but Octren is furious.

Now Octren has followed his former friend to the Cursed City, and he’s going to use his many lifetimes of experience to track down Torgillius. We don’t imagine it’s to present him with an award for services to science either.

As Octren pursues Torgillius and his master Radukar relentlessly through Ulfenkarn, some who fight alongside him privately question whether he means to slay the villains or join them as a lord of undeath. It’s best not to turn your back on him, just in case.