Day and Night in the Cursed City 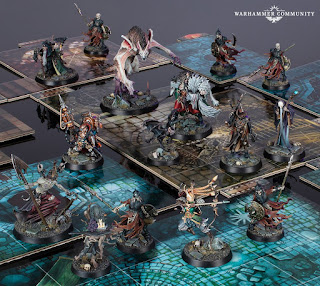 There is a distinct difference between what goes on during the day in the Cursed City and when Night falls. A Daytime Tracker keeps track of it with things getting a little scary during the night. Different profiles for encounters and Vampires.......  Here is the next preview for the Warhammer Quest Cursed City.

via WarCom
https://www.warhammer-community.com/2021/03/31/nightfall-can-clobber-you-in-cursed-city-heres-how/
Ulfenkarn lives under the thumb of its vampiric overlords. When the pallid daylight gives out, the evil creatures that stalk the streets grow even stronger.
Your band of adventurers use a Kharadron skyvessel called the Adamant as their base of operations, and they slip into the city to complete their various missions. We explored a few different types of journey you can take into Ulfenkarn earlier this week, if you missed it. When your heroes have completed their objective, they call for the ship to retrieve them before they face the full fury of Radukar’s servants.
During your games, the passing of time is represented by a daytime tracker, which slowly ticks away until nightfall – that’s when things get nasty. 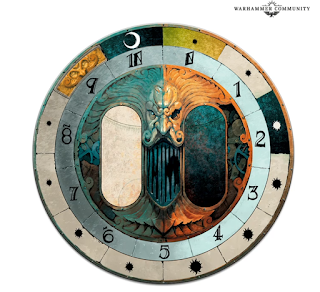 Faithful readers may have already seen some of the hero and hostile profiles, and now we turn our attention to what happens to these hostiles when the sun goes down.
Each enemy card has two sides – one to use during daytime hours and an Empowered version that activates only after nightfall. 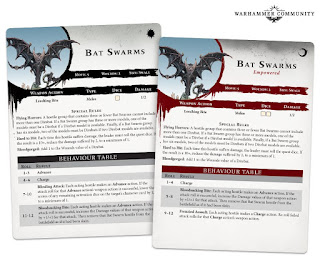 As you can see, these Bat Swarms behave differently at night – they’re far more aggressive and dangerous. If that’s the case with some of the most basic hostiles in the game, we imagine it’s much more pronounced with the vampiric foes.
On top of stronger opposition, there’s a different set of crises that can occur after nightfall, and some of them are rather… unpleasant. 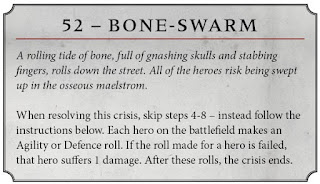 Every journey into Ulfenkarn will be a race against time – be sure to watch the Learn to Play Cursed City video so that you’re prepared to get your adventurers back to safety before night falls. Head over to the website to check it out now, plus discover more about the background, the band of adventurers, and the enemies you’ll face.