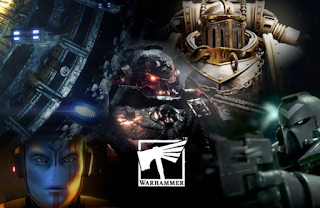 Astartes was awesome... but now GW has reached out and is teaming up with the creators for a sequel and things will never be the same!

Very cool to see this happening and I cannot wait to see more about what is coming down this pipeline.
via WarCom
https://www.warhammer-community.com/2021/03/10/introducing-the-next-wave-of-warhammer-animations/

We’re thrilled to announce the Warhammer Animation Team are working with Lost Legion Studios on The Exodite, with PaxelArt on Primaris: The Last Templar, and with Codex Film on Iron Within.

“We at Lost Legion Studios are excited to finally reveal that we’ve been working alongside the Warhammer Animations Team to produce The Exodite! Originally, we were a fan project making content for the community, and to be able to make something official is a dream come true, and we can’t wait to share it with you.”

“We are proud to say that we are working with Games Workshop on a short cinematic series about the Black Templars Space Marines. It is an honour for us to work in a universe we love so much, together with its creators. We want to say a huge thank you for this opportunity, Games Workshop.”

“As long-time Warhammer fans, we’re very excited to combine our passion for the Warhammer hobby with our experience in CGI. It was a surreal feeling when Games Workshop approached us. It brings a lot of new possibilities, and we can’t wait to deliver this story of Iron Warriors and Drukhari to the community!”

And there’s more! Several other collaborations are in the early stages of development, as well as two brand new shows (in addition to Hammer and Bolter, Angels of Death, and Interrogator) having been scripted and sent into production.

A first look at The Exodite

A T’au Empire fleet, a stealth suit, some advanced map-tech, and was that a Kroot warsphere?!

We haven’t seen much of the T’au in animation before – it’s a very different aesthetic from the gothic warrior-culture of much of the Imperium, but not without its own mysterious quasi-mystic ways. Forget about culture, though; we can’t wait to see that battlesuit’s fusion blaster in action!

We’ll have more on The Exodite tomorrow, including a rundown of the story and a closer look at some of the shots. And there’ll be a new article every week that will keep you up to date with all the latest Warhammer animation news, giving you the lowdown on Primaris: The Last Templar, Iron Within, and all the others.

Now, there’s one last question that we’re sure you’re dying to have answered: “How will I be able to watch all of these great shows, and when will they be released?” We’ll have more news on all of that really soon. For now, you’ll want to make sure you have a My Warhammer account set up and ready to go.