Why You Should Be Playing Dark Age 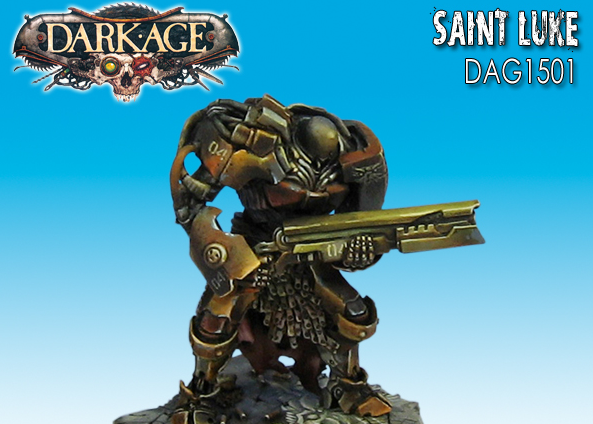 I was let in on this post that was on Dakka by the lead developer of Dark Age, Mr. Black. Dark Age really is one of my favorite games, and I have a couple readers asking me for more information on the game. Well, to be honest, there are a lot of reasons why I like the game, and this post really explains it all.

I personally have two armies that are good sized forces for Dark Age. I have a Skarrd and Brood army of almost a 1000pts each. A Forsaken army led by Saint Luke is on my list of things to pick up as well. I have shown pictures of these armies in the past, but here are a couple of my favorite models in those armies.

via Mr. Black, from his article on Dakka
Mr. Black here, Lead Developer of Dark Age, and I wanted to have a little chat with you about why you should be playing. There are lots of games out there right now bidding on your time, that's just the nature of our little community right now- your time is super valuable. Acknowledging that, I'm going to hit on the important parts first: 1. We provide our rules to everyone for free. -Basically, we don't believe that people should be charged simply for the privilege to play our game. You enjoy our game, you pick up the miniatures, you spread the word, and the community grows, simple as that. -That being said, our full Rulebook is always available for download: DARK AGE CORE RULES -The Stat Cards for all models in our game are likewise provided free. Basically, if it's rules related and needed for play, we don't charge you: STAT CARDS 2. We give our game, rules and models, yearly evaluations to keep everything balanced. -Balance is super important in any miniature game, and one broken unit can ruin a whole army. Likewise, it's a sucky feeling whem you find a unit you love... Only to find out they suck... We hate that feeling as well. As such, we've taken the following measures to fix that: -Our rulebook is updated yearly: Each year we release a new rulebook to fix any issues or grievances. It's important to note with this, however, two factors: 1. The Core Rules are a $20 book. 2. Anytime we release a new Rule Book you can trade in any previous one for a new one.... Free of charge. 3. So yes, once you have a rulebook, you're in for life. -Each year we review all our models. If one is overpowered, we fix it, if one is underpowered, we fix it. All models should be viable at all times, aka, you should be able to play what you think is cool. 3. Full tournament support -Our tournament series is the March to Immortality, leading up to the Immortals at GenCon -Why is this neat? Well first up if you host an MTI tournament at your store and you get at least 24 entries the prize you're fighting for is a Round-Trip Plane Ticket to Gencon. A store can be awarded 1 ticket a month doing so. -So what do you get for winning the Immortals? Pretty much the best prize in gaming. You'll work with our development staff to make a model based on yourself or a concept to your liking -Example: 2010's Immortal winner was Marc Berlove. When he won, he decided he wanted to include his eight year old son. As a result, the Bounty Hunter duo Phadras and Maximo were born:

4. Skirmish Game- 5-12 models on average -This one's pretty self explanatory. Dark Age is a true skirmish game, and even at higher point levels you probably won't break 10-12 models per side (and that's at the highest standard game level, 1000 points) 5. Scenario Based -Sure, you can kill 'em all. Our game slogan is EVERYTHING DIES, but if you just play like that you'll be missing out on the depth we offer. Dark Age is Scenario based. Currently our Tournament format features six primary scenarios and twelve secondary scenarios. At GenCon. when we update our Tournament Document for the 2015 season, that number will be growing to 8-10 Primary Scenarios and 30 Secondary Scenarios. 6. Eight distinct Factions -We have something for everyone in the fact we have eight main factions, each composed of a number of Sub-Factions, each with their own playstyle. -We also strive to avoid "Faction bloat", aka adding stuff to armies just for the sake of adding... Basically, when we view a faction as "done" it's done. We love adding new sub-factions and such, but more models for more models is pointless.. 7. Low cost of entry -Our starters are $50 or less and give you 300 points, which is perfectly fine for playing games. Our tournament level is 500 points, which is 1-2 blisters away. -Basically, for less than $100 investment you can have a full, tournament viable army. 8. Our models are great, and only getting better. -We want to have the best models of any game out there. Period.

and we're only getting better: