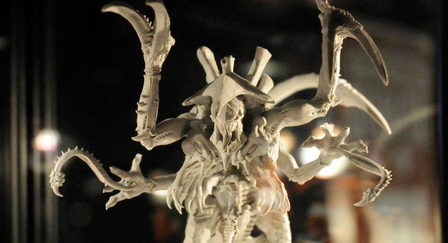 Rules for the Dimachaeron were uncovered today at 40k Open Day, and pictures are leaking across the internet of what this new Tyranid Monster is bringing to the table. Definitely a nice model.


Here is a leaked image of the new Dimachaeron rules that I thought was originally on the Mexican Ork. I didnt see it just now, so here is a different link.
http://descansodelescriba.blogspot.com/2014/07/reglas-de-dimacheron-tiranido.html


via an anonymous source
Some of the rules, but not all.
The new rules for the Dimachaeron
Unit type: monstrous creature (leaping)
Instinctive behavior Feed, rampage, adrenal glands