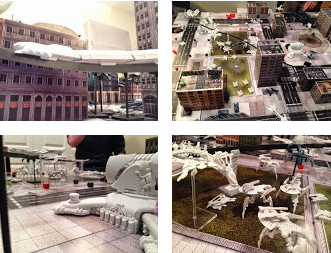 A few nights back, we had a 12,000pt Dropzone Commander game. Besides being a very large game with three players in a free for all, we incorporated several different missions to create a truly unique and chaotic battlefield. The Shaltari Tribes, United Colonies of Mankind, and the Post Human Republic were all represented here, as we battled for the following mission parameters........

Creating a 4,000pt list is not the easiest thing to do, as it takes combining two different forces, and in this case each of us did it a little a differently. Either way, you had to start off with a Battle force roster, followed by another roster to get up to 4,000pts.

I was not able to get all the lists before making this video, so I went without them. However, you can very much see how much was really on the table.
7/28/2014
Natfka
Battle Reports, Dropzone Commander